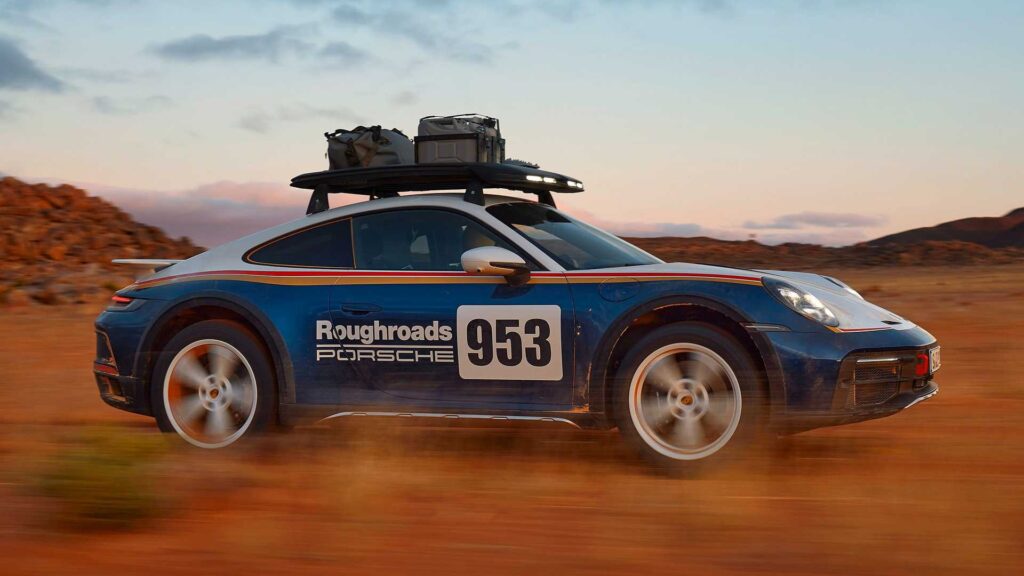 Porsche is celebrating an extraordinary world premiere at the Los Angeles Auto Show: the new Porsche 911 Dakar is just as comfortable off-road as it is on the highway.

Limited to just 2,500 examples, this exclusive model doesn’t just demonstrate the all-but-limitless possibilities of the Porsche 911 concept: it also evokes the first overall victory by Porsche in the 1984 Paris-Dakar Rallye. This momentous win also marked the birth of all-wheel drive in the Porsche 911.

This is why the new 911 Dakar is also offered with an optional Rallye Design Package, reminiscent of that iconic winning car.

Thanks to the recalibrated suspension the go-anywhere 911 sits 2 inches (50 mm) higher than a normal variant but a special lift system adds another 1.2 inches (30 mm) when needed.

To help with traction on less-than-ideal surfaces, the 911 Dakar is fitted with special Pirelli Scorpion all-terrain tyres. They’re designed for all-terrain, but they’re still Z-rated for stiffness and capable on paved surfaces. For drivers seeking something more specialized, summer performance tires or snow tires are optional.

Of course, it is sent through all four wheels via their superb eight-speed PDK gearbox, and with the help of launch control, it can reach 100 km/h (62 mph) mph in 3.4 seconds but due to the all-terrain tyres the top speed is limited to 240 km/h. There is also a special Rallye Launch Control that allows a bit of wheelspin for optimum acceleration on loose ground.

With this model, you get two new drive modes; Off-Road and Rallye. As you might imagine, Off-Road is designed for rougher terrain and automatically engages the higher ride height. Rallye is for loose surfaces, sending more power to the rear wheels for faster fun.

The car will be planted no matter what surface you are on thanks to standard-issue Porsche Dynamic Chassis Control and rear-axle steering. This is improved even further with engine mounts borrowed from the 911 GT3.

Other than a noticeable increase in ride height, the 911 Dakar sports a fixed spoiler at the rear, while at the front, it uses a CFRP hood from the GT3.

An optional Rallye Design Package further adds to the rally feel with a two-tone finish and start number on the side between 1 and 999. 911 Dakar buyers also have exclusive access to buy a Porsche Design Dakar-themed watch.

Porsche South Africa has confirmed that it will retail with a 3 year Driveplan for R4,140,000. As mentioned, there will only be 2,500 examples worldwide so it might be quite hard to get your hands on one. The first South African-bound cars will be here in the second half of 2023.