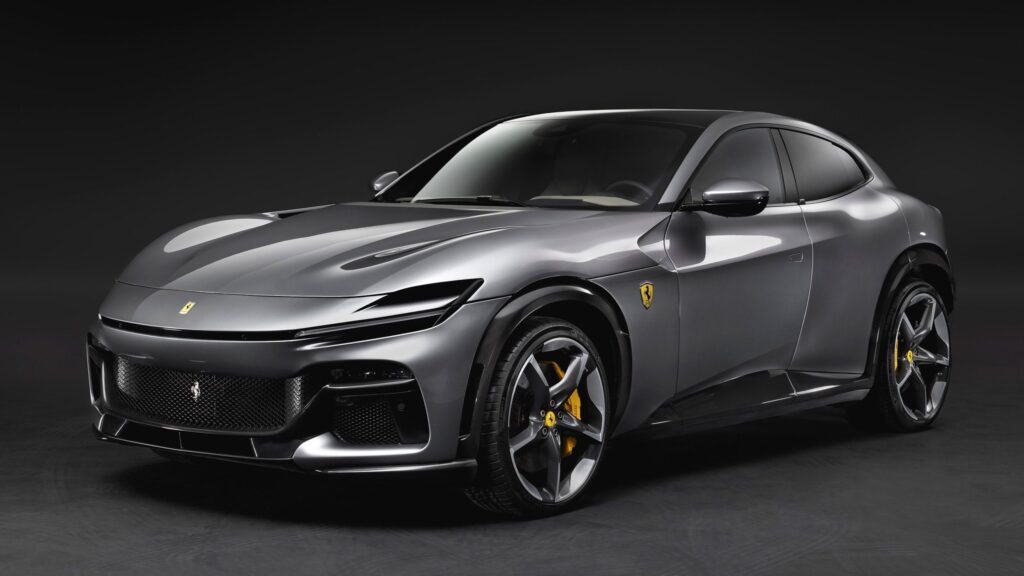 A few years ago, Ferrari stated that they would not venture into the SUV game, Fast forward to 2022 and here we have their first four-door called the Purosangue.

Ferrari is still distancing itself from the idea that the new model is, in fact, a sport utility vehicle. “We’re not calling it an SUV,” insists Ferrari CEO Benedetto Vigna. “We’re not even talking about SUVs.”

If you take a look at the overall package, we kind of get what Ferrari is saying. It is a little more like a slightly larger four-door sports car than a utility vehicle. At the back, you can only have two bucket seats so no family-friendly bench seat here.

Ferrari did superbly well in getting a 49:51 weight balance even with the massive V12 up front. They pushed the engine right up against the firewall and then used the 8-speed dual-clutch gearbox to balance it out as a rear transaxle.

What did surprise us was the use of suicide doors but thanks to the rear doors managing a 79-degree swing, getting in and out could not be easier.

The 8-speed dual-clutch transmission turns this grunt into a claimed 0 to 100 km/h (62 mph) sprint in 3.3 seconds with a top speed in excess of The Purosangue is estimated to hit 62 mph in 3.3 seconds and achieve a top speed in excess of 308 km/h (192 mph). Like the GTC4Lusso, the new model features an all-wheel-drive powertrain, and the front drive unit disengages above fourth gear and/or around 200 km/h (125 mph).

Working with Multimatic, Ferrari developed an active suspension system that leverage’s the Canadian firm’s True Active Spool Valve (TASV) technology, which uses four 48-volt actuators to control the damper’s stroke. Since the setup lacks stabilizer bars, the actuators can work in concert to manage both pitch and roll. The quick-acting adjustments can manage both wheel motion and ride height, the latter of which can drop up to 10 millimetres while the vehicle is cornering.

So what do we call the Purosangue then? A sporty crossover? A sedan on steroids? Considering its focus on delivering a driver’s experience for four passengers, it seems Ferrari has actively chosen to sacrifice quite a bit of utility for the sake of performance.

Pricing starts from €390,000 before taxes so we would predict a South African price of around R10 million.

Ferrari
Share. Facebook Email Twitter LinkedIn WhatsApp Telegram
Previous Article7 Things To Look At Before Buying a Sports Car
Next Article Electric F1: Can This Be a Thing of the Future?