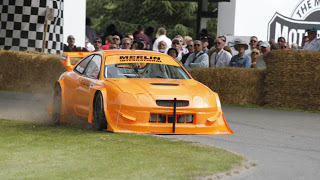 At the recent Goodwood festival of speed on the weekend it became apparent that not only is a Toyota Celica faster than a Ferrari but also quicker than a flippen Formula 1 car. This very non-standard Celica managed to claim a time of 48.07 seconds in the hillclimb hammering all the other cars, 200 of them to be precise. The beast has a 800hp power plant and only weighs in 1050kg. I must admit though, if I was given the choice to punish this up a hillclimb or the likes of a 458 or McLaren, I would with out a doubt take a standard purpose built supercar any day.