Following the recent tragic deaths of IndyCar driver Dan Wheldon and MotoGP rider Marco Simoncelli, motorsport has received some harsh criticism over safety and its relevance in a modern world where fuel prices and a green agenda are forcing road car manufacturers to make more efficient and environmentally friendly models. But without motorsport, the development of safer, leaner and greener cars would be a slower process, as many of the technologies used by manufacturers to make more environmental and safer road cars, started out on the track in the pursuit for speed.

Formula One, often seen as the pinnacle of motor racing, has also led to the development of many technologies that are becoming ever more relevant to the modern road car. Of course, it’s clear to see how technologies used by Ferrari and other sports car manufacturers, end up in modern performance cars to increase speeds and make the modern super car lighter and more aerodynamic. But the introduction of carbon brakes and carbon composites, once designed to improve speeds, are also helping sports car manufactures make safer models, which reduced fatalities on the road and even help reduce premiums of performance car insurance.

But it’s not just performance cars that are benefiting. Since the deaths of Roland Ratzenberger and Aryton Senna who both perished during the same weekend at Imola in 1994 Formula One has exponentially increased its safety, with increasingly stringent crash test procedures. This has helped engineers understand the effects of high energy impacts – knowledge that has improved safety in road cars as manufacturers develop more efficient protection systems. Other systems that started out on the track to improve lap times are also making road cars safer. Traction control and active suspensions, now no longer used in F1, are commonly fitted to road cars, helping to protect drivers in wet and icy conditions, while anti-lock braking systems (ABS) are now fitted to nearly all production road cars. It’s not just in safety where Formula One technology has aided road car production. As more and more road cars are reliant on electronic components for engine management, Formula One provides the ideal development ground. On the track, new components are rigorously tested before they finally filter down into road car production. With Formula One’s need to get as much performance from every drop of fuel, these systems can also help reduce fuel consumption by making road car engines more efficient. 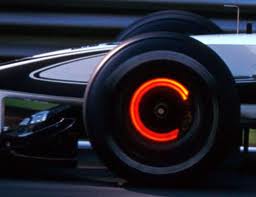 As Formula One intends to move to smaller engines from 2014, its technology is becoming ever more relevant to road car users. Engineers, looking to get the most performance out of limited cylinder capacities, in turn help engine manufacturers make more fuel efficient and better performing engines. Formula Ones is also getting greener, with its use of kinetic energy recovering system KERS. As green technologies are increasingly important to road car production, with various manufacturers producing hybrid models, the fast-paced development of Formula One mean technologies such as KERS are helping road car manufacturers develop more efficient systems to recover braking energies.