Cars of James Bond: Your Girlfriend Will Definitely Like It! 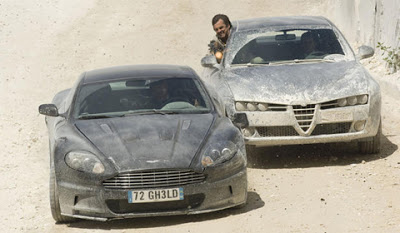 It’s no secret that Bondiana is the best PR for any product. Fleming always paid special attention to any subject of everyday life that Bond used. The cars, which, as we know, are not a luxury, but only a mean of transportation, have not become an exception.

Fleming himself preferred Bentley cars – that’s what Bond went to in the novel “Live and let die”, and in the next novel, “Moonraker,” James Bond bought even a new model – Mark II Continental Bentley – a classic two-seater R-type model .

In the film industry, the first Bond car was the silvery sports Sunbeam Alpine Convertible, on which Bond rode around, admiring the beauties of Jamaica, and also left the hearsay behind him in the movie “Doctor Know.” In the second film, “From Russia with Love,” Bond, after receiving a message on the pager, approaches his Bentley MK IV car and phones.

Let us remind you: the film was shot in 1963, and at that time the phone in the car was considered outstanding coolness. Today you can hardly surprise your girlfriend with it, but if she is a fan of the classics, what is called “old school”, then she definitely will be delighted with such a combination.

In this film, the friendship between James Bond and Bentley ceased, as the special place in the life of the legendary superspy was occupied by a new “monster” of the automotive industry.

For the first time appearing in the movie “Goldfinger”, a new silver Bond car won people`s heart. It was with this film where was born  the classic of the “Bond-super-car” series  – sporty, preferably silver and with integral “bells and whistles”, carefully established by the Department of Q.

The same brand with new options was used by Bond in the prolog of the film “Thunderball”, and in the films “Golden Eye”, “Tomorrow Never Dies” and “And the World Is Not Enough”, where 007 used this car as an exclusively personal means of transportation.

Demonstrated in the movie “You Live Only Twice,” Toyota was not run by Bond, but by his charming Japanese agent Aki. Speaking of all the “bells and whistles”, this car was equipped with only a Sony TV receiver built into the cabin, which Aki and Bond used to communicate with the head of the Japanese intelligence “Tiger” Tanaka.

Well, at that time such equipment was beyond the bounds of understanding of the average person, and it was perceived only as a “fairy tale”. By the way, Toyota 2000GT became one of the first sports cabriolets of the Land of the Rising Sun.

In 1969, in the movie “On Her Majesty’s Secret Service,” James Bond’s car was not equipped with any special devices – the only exception was one small detail that Bond almost never used: a folding rifle in a glove compartment, similar to the one that Bond used in the film “From Russia with Love.”

This inattentive attitude of Department Q to the car of the superspy cost the life of his only wife, Tracy de Vicenzo. However, the very Tracy`s car was just cool – her Mercury Cougar showed a high-level ride on the French sidewalks in the prolog, as well as in the pursuit when 007 was forced to hide from the pursuers by Mercedes in Switzerland. In addition, a couple accidentally won the ice rally thanks to this car.

In this creation of the American automobile industry, Bond and Tiffany Case arranged a kind of performance  in the movie “Diamonds are Forever”, driving around Las Vegas in an attempt to hide from the authorities, and “gray brothers” meanwhile smashed their cars into smithereens, trying to get them.

Bond demonstrated the English style of riding to the local sheriff, having driven on the right wheels into a narrow alley, and having left it already on the left wheels.

On the new AMC Hornet, borrowed from his American colleagues, James Bond, along with Sheriff Pepper pursued Francisco Scaramanga. There were not special devices in this car, but the agent 007 managed to perform “Astro spiral jump”  on it, forcing the destroyed bridge.

If you decided to godatenow, buddy, and you think, how to impress your girl, rent one of the nasty cars, similar to those on which the great James Bond traveled, kicking bad guy`s asses. As practice shows, this is the best option!