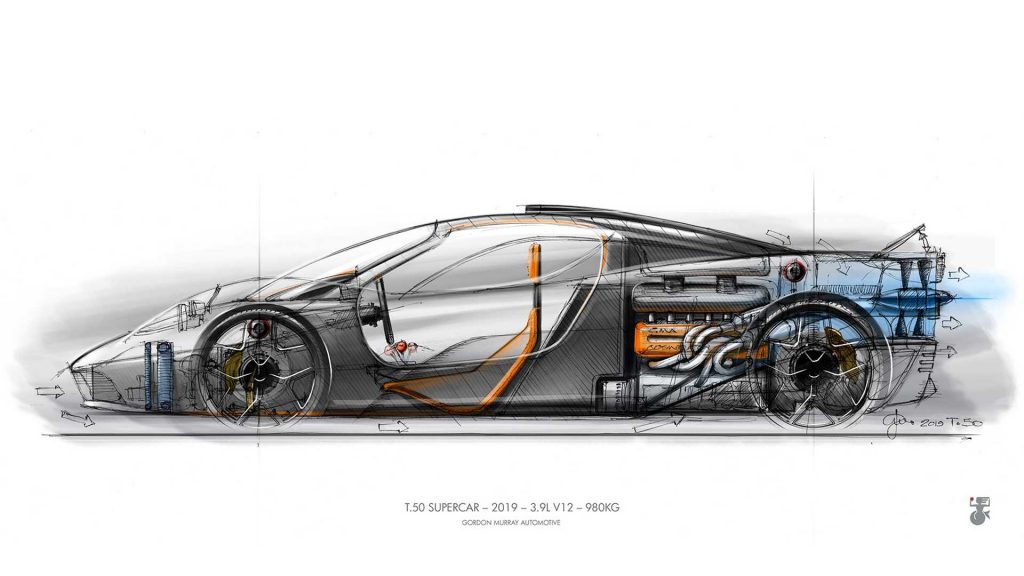 Earlier this year engineer extraordinaire, Gordon Murray, announced that he is planning on making his very own supercar, the T.50. Considering Murray has the likes of the McLaren F1 and multiple Formula One cars in his CV, he knows a thing or two about making a proper car. Now, the South African-born engineer has announced some more facts and figures to get us even more excited about, what Gordon states will be, “the purest, lightest, most driver-focused supercar ever built.”

Let’s talk engines, shall we? Murray has decided to put in an engine that is a dying breed – a 3.9-litre, mid-engine, naturally-aspirated V12. Power output is quoted at 650 finely tuned British horsepower (485 kW) and 450 Nm of torque. The engine will be made in co-operation with Cosworth and is claimed by Murray to be “the highest-revving engine ever used in a production car” revving to an insane 12 100 rpm. Yes, even higher than the upcoming Aston Martin Valkyrie.

Now at first, these power figures don’t sound like they will be producing the car Murray is claiming it to be. However, it all makes sense when you consider the weight of the car because the T.50 will weigh a significantly little 980 kilograms in total. As a result, the T.50 will have an impressive power-to-weight ratio of 663 HP (494 kW) per tonne – higher than any other naturally-aspirated sports car. According to Murray, this V12 is, “the highest power density, lightest, and fastest-responding naturally-aspirated V12 ever made for a road car.”

“We are tremendously excited to be part of the T.50 supercar project, and to have the opportunity to work alongside Gordon Murray Automotive,” said Bruce Wood, Cosworth Managing Director. “It is a real privilege to play such a key role in the T.50 with an all-new V12 3.9-litre engine, designed, developed, manufactured, and assembled by Cosworth’s industry-leading powertrain division.”

The N/A V12 is not the only rarity that will be fitted to the car, because in addition to that you will find a six-speed manual gearbox designed by gearbox fundis Xtrac. Power will be delivered purely by the rear wheels. Taking all this into consideration, you will probably need to know what you are doing behind the wheel when driving this machine.

Murray considers the T.50 to be the spiritual successor to the iconic McLaren F1. This is evident seeing Murray’s new creation will feature the three-seat layout we saw in the F1, with the driver being in the centre. Murray also drew inspiration from his iconic Brabham Formula 1 “fan car” design, because in the aid of aerodynamics, a 400 mm fan will be found at the back of the car to help with underbody flow.

Unfortunately, only 100 of these seemingly incredible machines will be made at a cost north of £2 million (approx. R37.8 million). Customer deliveries are expected to begin in early 2022.