Being a petrol-head is more than a mere hobby; it’s a way of life. For those with a yen for all things car-related, we eat, sleep, and breathe our passion. It’s not only about sitting behind the wheel, feeling that power thrumming through our fingers. We like to read and learn too, which means endless reruns of Top Gear and subscriptions to every motoring magazine going.

Sometimes our hobby spills over into other areas. Wave something vaguely car-related in our direction, and we’re there like a shot. That includes games. To help you find some new favourites, we’ve rounded up the best of the best for you to check out.

The F1 games are always guaranteed to be enjoyable. Year on year, they become better and better, continually adding innovations and gameplay elements. Their 2011 title, for example, was the first to become available on eighth-generation handhelds, and their progress hasn’t slowed with the latest addition to the line-up. That’s right: 2020’s official video game is the best to date. For the first time, players can create their own F1 team, choosing a driver, engine supplier, sponsor, and teammate. They can then compete as the 11th team on the grid, building facilities and developing their potential as they play.

If you want to game with friends, this is now supported too, thanks to the addition of split-screen racing. This means you can connect with the people you’re closest to by playing your favourite game together.

We’re also big fans of Dirt Rally 2.0, which was released in 2019. This game brings something different to the table, allowing you to perfect the art of off-road handling in a way you’ve never been able to before. Immersive and authentic, it will transport you from your living room to the driving seat of a modern R5 machine.

There are various tracks to try your talents on and plenty of different vehicles to choose between, which means this game never loses its novelty. Not only that, but it’s oddly convincing, so much so that you could probably go straight from playing to a real-life rally car and not feel completely out of your depth. 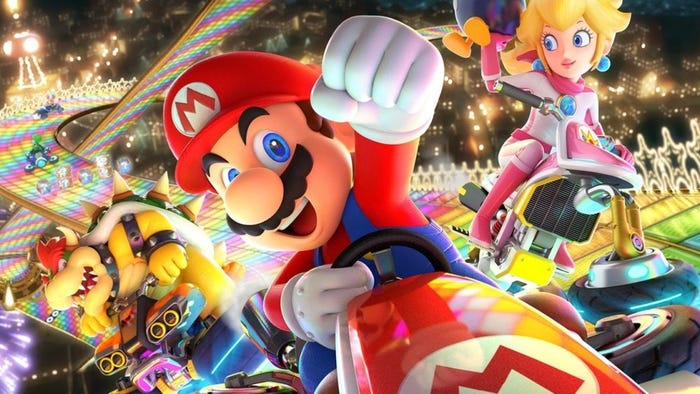 This time, we’re opting for an old favourite and presenting to you Mario Kart 8, which was released all the way back in 2014 and then again as the deluxe version in 2017. While it may not live up to the realism of Dirt Rally 2.0 or the official F1 game, it does provide some fantastic racing action for those with energy to burn.

How do you expend energy while sitting in a chair and gaming? With all of the exciting bouncing, whooping, and crowing you’ll make while playing. Exciting, fast-paced, and most of all fun, this is a simple game we never get bored of. Plus, we can relate to Mario on some level. Like us, he’s not an athlete or an extreme talent, although he does have a moustache we’ve very envious of. Despite this, he does what we can only dream of: successfully navigates vertiginous circuits in the most spectacular of ways.

Added to this, Mario Kart 8 Deluxe is a great one to play with friends thanks to its battle mode. That means you can absolutely trounce your pals whenever the fancy takes you and earn eternal bragging rights as a result.

Based on Formula 1, Formula X is a progressive slot game that can deliver payouts in the thousands. And even though you have to pay to play internet slots, there are ways to reduce your initial outlay, such as keeping an eye out for bonuses. Featuring vibrant animations and cool retro graphics, the game has a speedy theme to it which will make any motor racing fan feel at home. There are five separate reels for you to watch. Three different jackpots are up for grabs, so depending on how the reels align, you can take home some surprisingly hefty prizes.

The online casino industry in itself is fast and competitive, and there are many offerings when it comes to online casinos. These games have the added boon of offering real-money prizes, with some offering exclusive bonuses. Sites such as this help players discover the best deals and include reviews for those wanting to find more information and guidance. Today, you don’t need to be limited to your PC, and can instead play on your smartphone.

Sure to induce a real sense of nostalgia in those who remember old-fashioned arcade games and the fun they had playing them; this is a nice option when you’re on the lookout for something a little different from your standard video game fare.

Tell us, which of these games would you most like to try