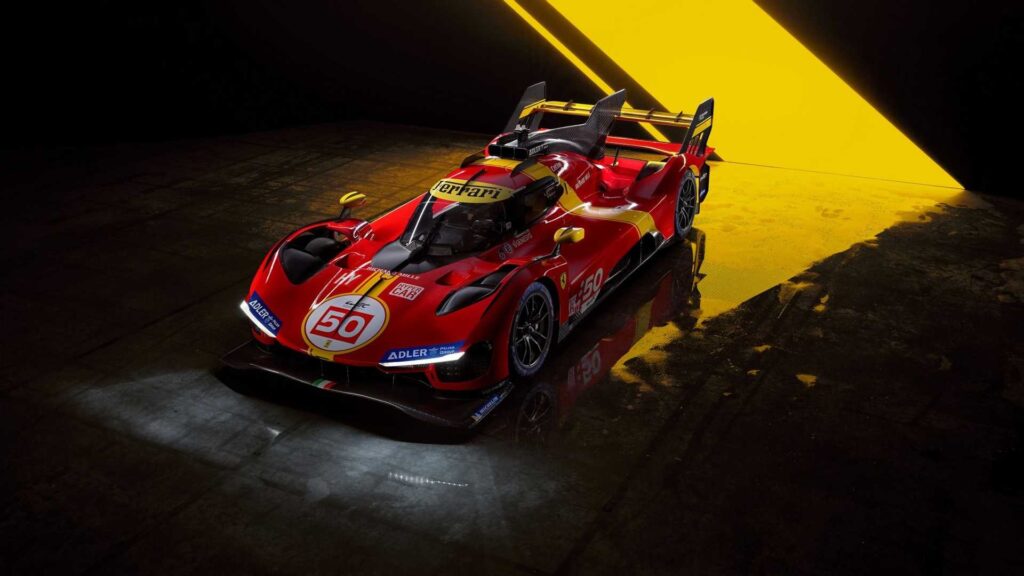 Ferrari has unveiled its all-new 499P Le Mans Hypercar with which it will bid for overall victory at the Le Mans 24 Hours next season, for the first time in exactly 50 years.

The world’s most famous sports car maker gave the historic new model its world debut at Ferrari’s Finali Mondiali extravaganza at Imola, revealing a prototype that features a clear nod to its endurance racing past as well as a styling connection to its current road cars.

At the heart of the electrified machine is a 3.0-litre V6 with a pair of turbochargers and although the engine black has the same architecture as the engine from the 296 GTB, it is apparently “not the same engine”.

A single 272 hp (200 kW) electric motor (generator) powers the front axle (the power level defined by the regulations). The rear wheels receive power from the 680 hp (500 kW) engine. That output represents the maximum allowable in the class. A 900-volt battery mounts just beneath the 499P’s fuel tank.

Two 499Ps will be entered by the factory Ferrari AF Corse team in the 2023 World Endurance Championship, which incorporates Le Mans. The model will make its racing debut at the 1000 Miles of Sebring in Florida on March 17.

John Elkann, Ferrari’s executive chairman, said: “The 499P sees us return to compete for outright victory in the WEC series. When we decided to commit to this project, we embarked on a path of innovation and development, faithful to our tradition that sees the track as the ideal terrain to push the boundaries of cutting-edge technological solutions, solutions that in time will be transferred to our road cars. We enter this challenge with humility, but conscious of a history that has taken us to over 20 world endurance titles and nine overall victories at the 24 Hours of Le Mans.”