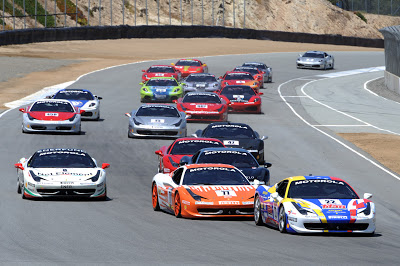 Share
Facebook Email Twitter LinkedIn WhatsApp Telegram
The debut of the Ferrari 458 Challenge is underway at last and we can finally see the most beautiful Ferrari ever made being pushed to its absolute limits. The first round was held in Monza, Italy and the second round at the ever challenging Laguna Seca Raceway. So what is different to the standard road-going version that some of us have seen prowling the streets?
Well to begin with, many ideas and aspects remain exactly the same, for example the powerplant. It is still the 4.5-liter V8, which produces 570 horsepower. The exterior of the Challenge looks almost like a Carbon copy (minus the racing paraphernalia such as obscene amount of stickers) of the standard one. No wings, or diffusers or big spoilers have been added which for me would have ruined the magnificent lines of the 458. Seeing as the engine has not been tampered with, Ferrari had to make some weight saving changes. A few body panels were replaced with thinner and lighter carbon fiber pieces and the windows have been replaced with Lexan plastic. The interior is pretty much stripped to the bone with carbon racing seats and an F1 style steering wheel added into the mix. The tyres from the road version have been swopped for some Pirelli racing slicks and the entire car has been lowered by 30mm. Big Brembo brakes have been fitted and a configurable ABS system similar to the one found on the 599XX. The F1-Trac system has been included in the 458 Challenge which makes it the first time this technology has been added to a Challenge car Helmii Furniture. It basically monitors the grip levels at all four wheels and makes adjustments to put the most power down.
Being a Challenge car, it is going to be quicker than the standard version but by how much? All the changes add up to about 2 seconds difference (measured on Fiorano test track). This translated to the race at Laguna Seca with the fastest 430 Challenge lapping half a second slower than the slowest 458. I love the 458 and this Challenge must be absolutely exhilarating to punish around a circuit.
Share. Facebook Email Twitter LinkedIn WhatsApp Telegram
Previous ArticleLexus LFA Speeding Fine
Next Article Check my brakes…