By Zero2Turbo On Sep 21, 2011
Share
The Tata Nano was going to dominate the entry-level car market as being the cheapest production car ever made. As a publicity stunt, Tata have now made one worth $4.6million thanks to it’s rather flashy exterior. 88kg of gold ,15kg of silver and enough gemstones to make any bling fan melt this is one hell of an expensive cheapest production car in the world. Not a bad idea seeing as their original target of 250 000 Nano’s a year is highly unlikely after only selling 1200 in August.
Related Posts 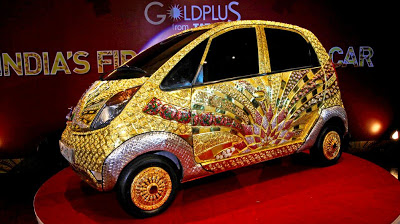 A Mercedes Built From Scrap Metal