Transponder keys are tiny devices with big impact. Opening a whole new world of security options for
vehicle owners, they combine the key functions of transmitters and responders. The result creates a durable and reliable key that works by emitting a radio signal from the key to the car to lock or unlock the vehicle. From a security perspective, this technology that’s boomed over the recent years is huge.

Whilst they serve a similar purpose to standard care remote keys, transponder keys offer a higher, more effective level of security to prevent vehicle theft. This relatively new technology isn’t just for cars though. Although transponder keys are most commonly used for vehicle security, homeowners are starting to take advantage of its benefits. Transponder keys can be applied to a variety of different situations that rely on strong security measures. Here’s what you need to know about them before you decide if it’s right for you:

How Does a Car Key Transponder Work?

Transponder keys fall into the automotive key category. Often confused with auto remotes that unlock and lock your car, transponder keys operate from an independent transponder security system. As opposed to non-transponder keys which rely on a chip or Remote Head Key built into the remote. This higher level of security key is part 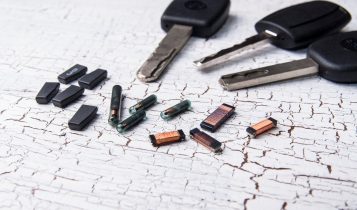 of the anti-theft system; thus, the vehicle cannot operate without the proper response from the transponder key to the computer.

As security systems become more advanced, many new cars are fitted with some form of transponder technology. And because the key relies solely on its programmed response, thieves are unable to hotwire the car. Without the required signal, the vehicle won’t be able to bypass the system. Each transponder signal is unique to the vehicle which it unlocks too. This can be programmed in by a qualified car locksmith.

Why Would You Purchase a Transponder Key vs. a Normal Key?

Your car – and your home – are arguably two of your biggest investments. Both should have the highest level of security to protect your hard-earned work and eliminate any risks or potential threats. Transponder keys have had an edge over regular keys for a while now. And it’s easy to see why. Complete with unique serial number verification, anti-theft car system and detection for unauthorised access which raises an alarm to the owner, it offers the whole package compared to just any key.
Because transponder keys are part of a programed security system though, they do have the potential to malfunction. A regular key will only require simple repairs if it becomes damaged over time, whereas the components of a transponder key are more comprehensive and must be pulled apart to fix. If you compare this to the hassle of replacing regular keys when they have been lost or how much your home or car’s security can be jeopardised should the keys get into the wrong hands – the decision to go for a transponder key instead makes financial sense.

How do You Program a Transponder Key?

Author Bio
This article is written by Jayde Ferguson, who writes for Central Screens and Locks – a dedicated, family owned business specialising in authorised locksmiths and security for your car or home since 1993. You can catch Jayde on Google+ to discuss this piece.