Dodge released a super unusual pickup truck. Called the Lil’ Red Express Truck, the truck offered difficult-to-find styling and serious performance capability.  In fact, in 1978, the truck was the quickest vehicle made in the United States, as in Car and Driver magazine testing it could go from 0 to 100 MPH. Yes, this vehicle beat the Corvette and all other powerful muscle cars! Today, excellent examples of the Dodge Lil’ Red Express Truck can be purchased from around $10-15K Continue reading to learn more about this truck! 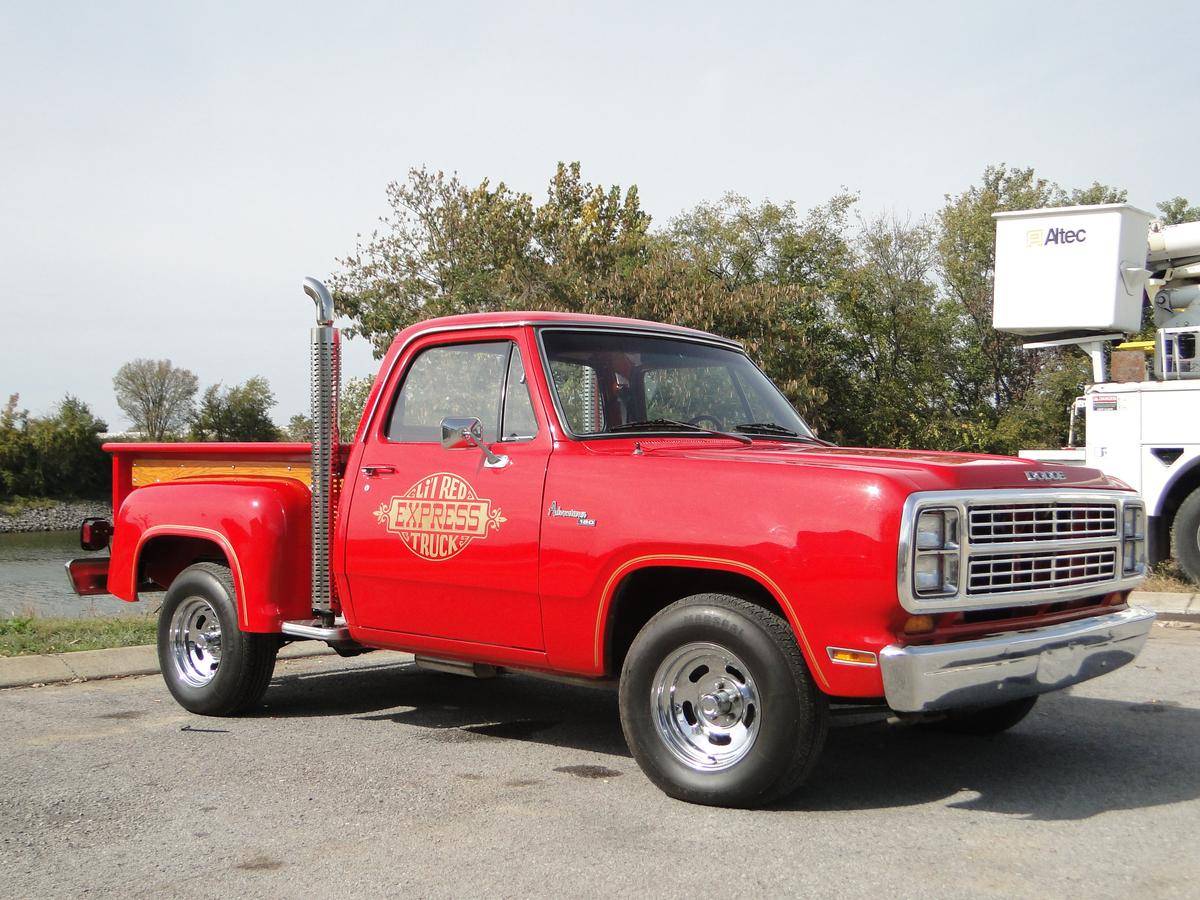 The Lil’ Red Truck was built on Dodge’s 115-inch short-wheelbase. It has a Utiline-style half-ton D150 frame with a 6,050-pound gross vehicle weight. What made the truck travel so quickly was the engine that Dodge put into it– the E58-specification police engine equipped with SuperFlow heads, heavy duty valve springs, a police cam (252° duration with 33° of overlap), dual-snorkel air intake and cold air induction. There was also a modified A-727 transmission with a 2500 rpm stall converter.

The Lil’ Red Truck’s package also had Hemi style free-flow mufflers with a crossover pipe breathing through 2 x 2.5” monster chrome stacks. These stacks jetted up the truck’s sides. The Lil’ Red Express Truck was so quick because of a loophole in the regulations.  It didn’t have to have any restrictive catalytic converters in the exhaust pathway like passenger vehicles needed.

This bold truck had a fire engine red paint scheme with large graphics embellishing the cab’s doors. On its front, the Lil’ Red Express Truck rode on GR60x15 raised white letter tires with seven- and eight-inch wheels. The interior could be attained with a bench seat in red or black or with available bucket seats, and a fold-down arm/rest console could be purchased with the truck.

The Lil’ Red Express Truck was super unique, however, only 2,188 units of it were sold in 1978. Nonetheless, for a while it gave its owners a taste of the raw power of the country’s quickest factory vehicle. And here’s another interesting detail about the truck: it was originally supposed to be called the ‘Red Warlock’, but its name changed somewhere between the vehicle’s making and its March 1978 launch.

With the 1978 Dodge Lil’ Red Express Truck’s success, 5,118 1979 Dodge Lil’ Red Express Truck were made. Most of the features remained unchanged for 1979, but there were a just a few changes which included the ability to put unleaded gas in the tank, a catalytic converter, and, according to www.dchchryslerjeepdodgeoftemecula.com out of Temecula, CA, an 85 MPH speedometer.

The most outstanding styling changes on the 1979 editions were the new flat hood and dual square headlights that replaced the round versions on 1978 Dodge Lil’ Red Express Truck’s. Also, the 1979 Lil’ Red Truck rode on LR60x15 raised white letter tires on eight-inch chrome wheels on each and every corner.

All About Bluetooth in Cars