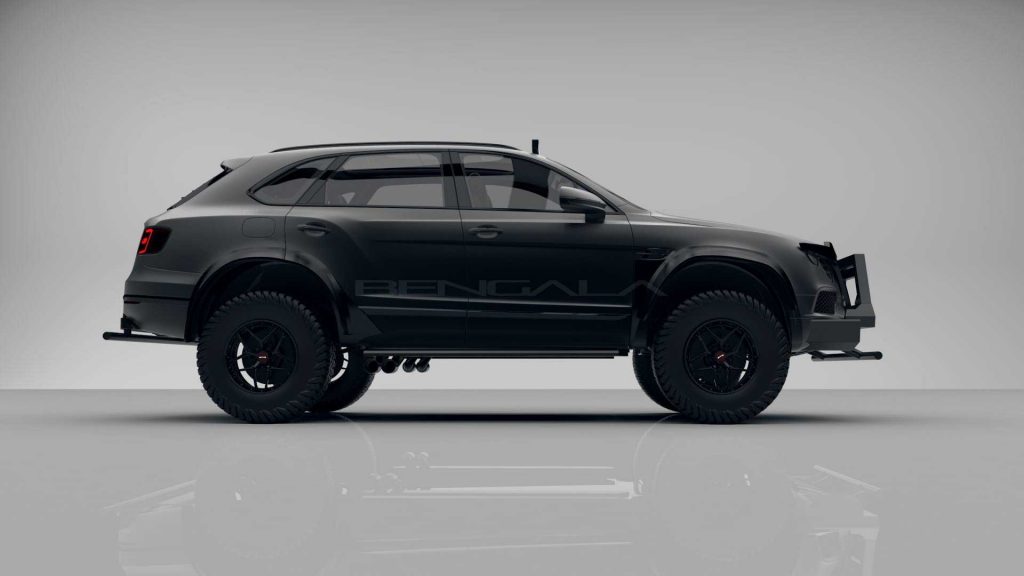 When one thinks of the Bentley Bentayga, usually you would think of the epitome of luxury and exquisite finishes in and outside of the car – the best that British luxury has to offer. A Spanish company called Bengala Automotive Design SL, on the other hand, seemingly had a different array of thoughts when they saw the Bentayga. The result of their somewhat unconventional thoughts is a military-spec, murdered out version of Bentley’s first SUV.

As you can probably tell, most of the work has been done to the exterior of the car. Starting at the front, Bengala has added a new front bumper which seems to offer the Bentayga the capability of bashing through buildings. Of course, what would an off-road vehicle be without additional LED light bars? Therefore, Bengala has added two – one on the roof and another on the front bumper.

Moving along to the side of the bundu-bashing Bentayga, we can see the addition of two double side-exit exhaust pipes on each side. The wheel arches have also been increasingly flared to make room for the new Dillinger wheels that are fitted to the car.

Not much has been done to the rear of the car, besides the addition of a rear bar at the bottom of the boot’s door and some fettling with the rear window too. Besides the exterior modifications, Bengala has also been working on the suspension to (would you believe it) be more suitable for off-roading.

Unfortunately, only 15 of these bonkers Bentayga creations will be made. Was this what Bentley had in made when they designed the Bentayga? Probably not. Do we wish we could have one? Absolutely!