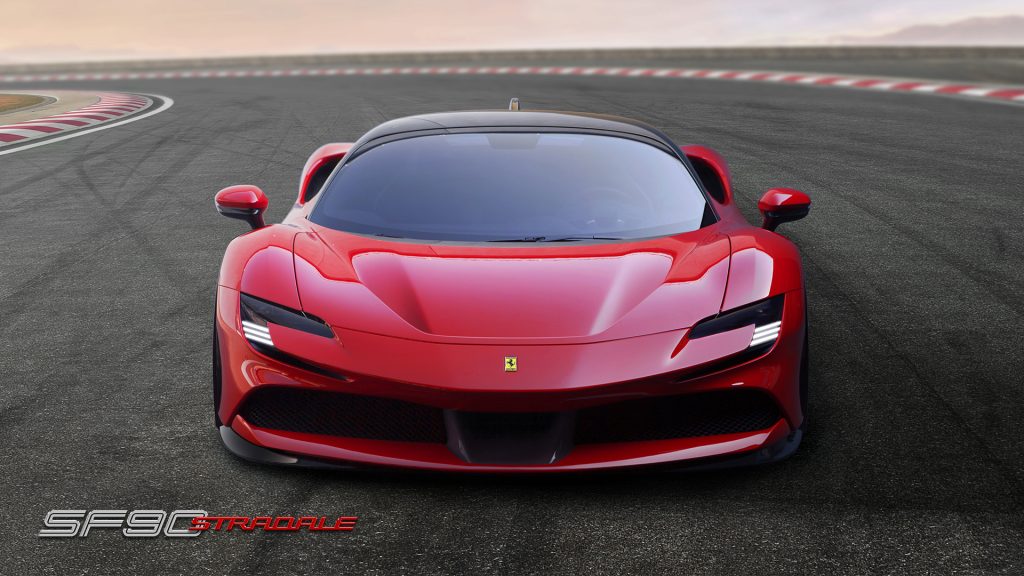 It packs 986 horsepower (735 kW) from a twin-turbo V8 augmented by three electric motors, and it establishes itself as Ferrari’s new pinnacle. If you recall, this is the first time a V8 has occupied the top of the Ferrari lineup since the iconic F40.

The twin-turbo V8 has been bored out to 4-litres and thanks to an improved intake and exhaust routing, the engine makes 769 hp (573 kW) and 800 Nm (590 lb-ft) of torque on its own. The additional 217 hp (162 kw) comes from three electric motors (one powering each front wheel, and one stacked between the engine and gearbox.) Powered by a 7.9 kWh lithium-ion battery mounted just behind the passenger compartment and spanning the width of the chassis, the car can cover up to 25 km (15.5 miles) in electric-only mode, and can reach a maximum speed of 135 km/h (84 mph) on battery power. Pop it into EV-mode and you will find yourself driving the first front-wheel drive Ferrari ever.

Not only is their most powerful road going offering ever, it is also their first mid-engine Ferrari supercar with all-wheel drive, and the SF90 Stradale uses all that traction for major acceleration. Ferrari promises the car will do 0 to 100 km/h (62 mph) in 2.5 seconds and 0 to 200 km/h (124 mph) in just 6.7 seconds.

Sending all this power to the wheels is an all-new eight-speed dual-clutch transmission. The additional gear makes up, in part, for the relatively low red-line of the updated V8 engine but it does not have a reverse gear so you will be backing up using the front-wheel electric motors.

It is the norm for cars of this calibre to feature active aero and the SF90 Stradale is no different. Instead of a rear spoiler that rises above a certain speed, the new Ferrari’s rear aero activates by lowering a wedge-shaped panel directly ahead of the rear edge of the bodywork, revealing a large Gurney flap-style spoiler. This fast-acting aero system allows the car to go into low-drag mode on straightaways and increase downforce under braking or cornering.

Inside the supercar it is clean and minimalistic. There are no physical buttons anywhere on the dashboard and everything is pretty much capacitive touch. Nearly every driving-related control is located on the steering wheel, while climate controls sit on a capacitive-touch pod to the right of the steering wheel. Gear selection is done by three push-pull toggles on the transmission hump, designed to be reminiscent of a gated manual shifter, while steering wheel paddles handle up- and downshift duties.

The instrument panel is entirely digital, made up of a giant 16-inch curved display screen that encompasses gauge readouts and navigation display. This is also the first Ferrari road car with a head-up display.

If this package is not enough, there is a more hardcore version called the SF90 Stradale Assetto Fiorano. The car you see below in silver is one such example and features upgraded shock absorbers, lightweight titanium springs and exhaust, carbon fibre wheels and other weight-savings measures for a total of 30 kg of weight savings. The Assetto Fiorano also offers greater downforce and more grip thanks to Michelin Pilot Sport Cup2 tyres (an upgrade from the standard-equipment Pirelli P Zeros).

What do you all think about this radical creation from Maranello? For us South Africans, the car is a series production model so it will indeed be heading our way.