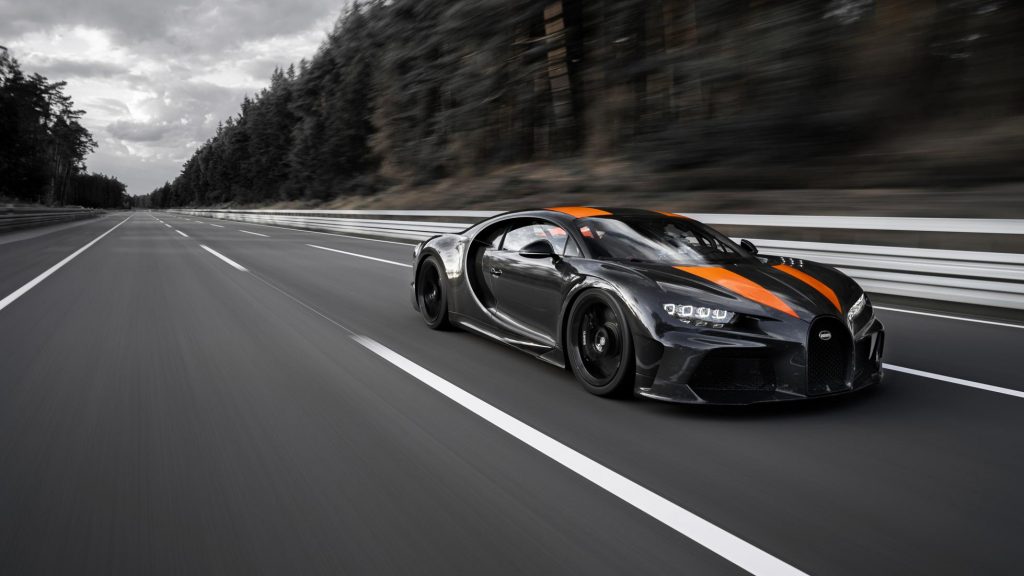 Just yesterday we shared footage of the Chiron Sport hitting its limited top speed of 420 km/h and now we have something even more remarkable.

This slightly modified Bugatti Chiron became the first hypercar to pass the 300 mph barrier on the 2nd of August with a top speed of 304.77 mph (490 km/h).

Over the past six months, a team of engineers from Bugatti, Michelin and Dallara set their focus on creating a machine to break the mythical 300 mph barrier.

As mentioned, this is no ordinary Chiron and you can tell that immediately by the way it looks. It is 25 cm longer and has a much more purposeful appearance. The significantly lowered ride height not only reduces drag but also gives it a lot more menacing presence.

At the back you will notice the long tail with a smaller cross-section to reduce drag and if you think you have seen those exhausts before you would be right as they were seen on the newly revealed Centodieci.

Further drag reducing measures were the removal of the rear wing and airbrake and replaced with a static unit sunk into the tail.

“The biggest challenge is to get the overall package right, not only design, not only aerodynamics, not only engine, not only tyres. It’s to get everything together and working in one car,” says Frank Heyl, the man with the most outrageous title at Bugatti – master of arts, head of exterior design.

As you would expect, the inside has been modified to a certain extent with the installation of a roll cage and removal of the passenger seat alongside a number of visible and invisible weight-saving measures.

“Bugatti has once again shown what it’s capable of. With this new record of the Chiron we enter again uncharted territory. Never before has a series manufacturer reached this high speed,” says Stephan Winkelmann, President of Bugatti. “Our goal was to be the first manufacturer ever to reach the magic 300mph mark. We have now achieved this – making ourselves, the entire team and myself, incredibly proud.” With this record, Bugatti will also withdraw from the competition to produce the fastest serial production cars. “We have shown several times that we build the fastest cars in the world. In future we will focus on other areas,” says Winkelmann.

The 300 mph project will inevitably result in a production Super Sport version of the Chiron (even if Bugatti refuses to confirm it as yet) and future generations of the Chiron, each improved by the lessons learned breaking the 300 mph barrier.

What will this incredible achievement do for the likes of Koenigsegg and Hennessey? Well, we’ll have to wait and see but for now, there is a new speed king in town and you can bet that the others want to get in on this action.

500 km/h will happen in the very near future.