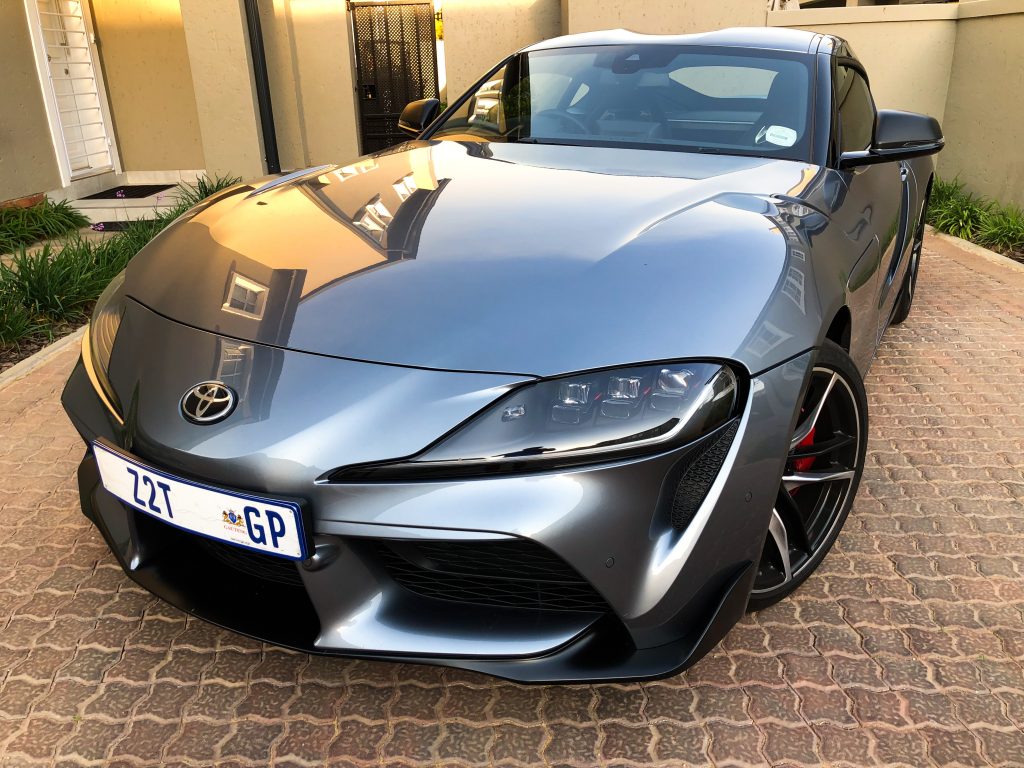 The new Toyota Supra has quite possibly been the most talked-about car over the last year in the motoring industry and we recently got behind the wheel of one to see what all the fuss was about.

Some are referring to it as an automotive Frankenstein since its built with parts from the BMW and Toyota bins but it has been done so in a very efficient and effective manner.

The new Supra and BMW Z4 are indeed built upon the same platform at the same plant in Graz, Austria and they share much of the same hardware, including the same single-turbo 3.0-litre straight-six and eight-speed torque converter auto gearbox. Toyota claims the output in the Supra is 335 hp (250 kW) with 494 Nm of torque but a recent dyno test suggests it could actually be producing about 380 horses (283 kW).

Having driven the new Z4 I can confirm that the two cars do have distinct characteristics in all aspects. The Supra’s styling is not classically attractive, but it’s amazingly muscular and present with bulges rippling out over the wheels and a long sloping aluminium bonnet.

Inside the Supra dash feels wider and lower than the Z4 giving you a more sporty feel. The downside is that in some places (especially the dash and steering wheel) the Supra’s interior feels a little cheaper in its materials and surfaces carbon fibre centre console aside. Those familiar with the BMW switchgear will feel right at home and we don’t think that is a bad thing because its a pretty flawless system.

The two cars drive differently too and although I did not climb out the Z4 and into the Supra, I thought the Supra was more communicative and more engaging to drive. This is probably because of the extra torsional rigidity provided by a roof and the slightly different centre of gravity but Toyota has slightly tinkered with the springs, dampers and various electronic systems’ which could add up to this tangible difference. The balance is one of the Supra’s stand out features and you would really have to try hard for understeer to arrive. The rear, too, is planted but the Supra can be coaxed into gentle oversteer with a lift of the throttle.

The new Supra seemed to pack more of a punch than the Z4 and that would confirm the dyno test mentioned above. Pop it into Sport, the exhausts liven up and the little sports car scampers wherever you aim it. Getting in and out could prove to be a little on the frustrating side as I knocked my head more than once climbing in and I am not even remotely tall.

The Supra has a well balanced, grippy chassis that is both involving and playful. With a comfortable ride and a decent level of practicality, you won’t be afraid of using it every day, either.

Would I take it over the slightly pricier BMW Z4? Without a shadow of a doubt. This is a brilliant package from the Toyota (and BMW) team and if rumours are true, this is just the beginning of a new Supra generation with lots of variants still to come.

Pricing starts at R953,000 for the GR Supra ‘Track’ model. The standard GR Supra will hit your wallet to the tune of R1,072,300 while the Matte Grey edition will set you back R1,092 300. The base Track model can only be ordered in red, while the top models get a wider choice that includes white, silver, black, yellow and blue.