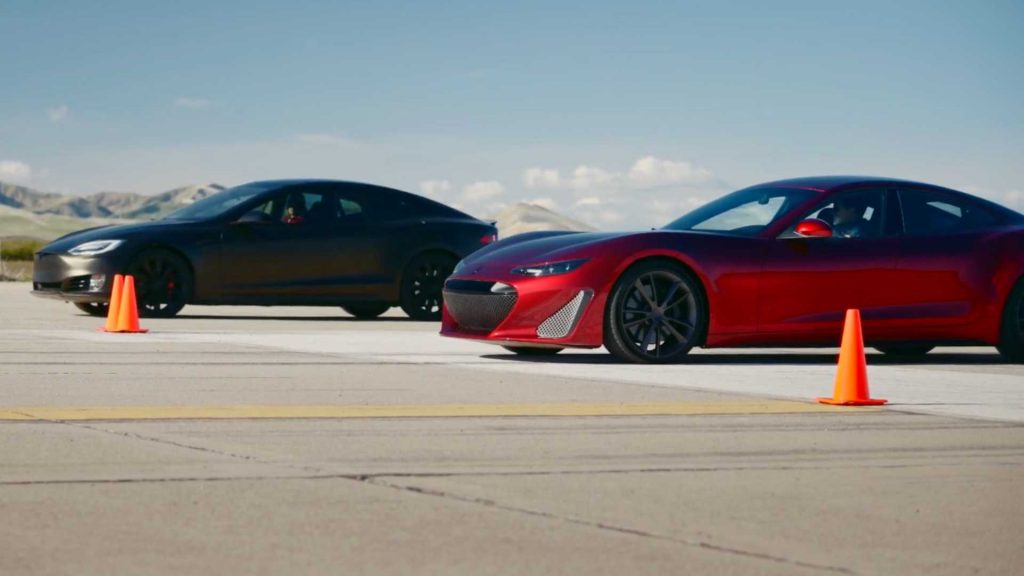 For most of us, the Tesla Model S P100D Ludicrous+ is probably what springs to mind the most when thinking of a fast EV sedan, which is very good for the brand. However, setting the benchmark makes you vulnerable to attack from challengers seeking the very same crown that you’re sitting on – which is the case with the Tesla as it now has a foe that has proven to be rather noxious.

California-based company called Drako has recently been in works of an EV supercar. Called the GTE, the four-door high-performance electric car first showed face at Pebble Beach last August with promises such as a top speed of 332 km/h, to say the least. Now though, the automaker has released a promo video of the EV showing what the GTE does to the Tesla Model S P100D Ludicrous+ in a drag race.

Judging from the camera angle, the two electric supercars are quite matched at launch, but as the speed climbs the more powerful Drako shows the Tesla it’s rear which is the case right until the end of the race.

The Drako GTE is powered by four electric motors, with each individual motor powering each wheel to make combined power output of 1,200 hp (895 kW) while total wheel thrust is rated at a ridiculous 8,813 Nm! Thanks to a 90 kWh battery pack, this car is promised to offer a driving range of 402 kilometres before it runs out of juice.

As you would expect from a high performance EV, the rest of the GTE’s components are aimed at handling the brute force. For starters, Drako saw fit to kit the car with carbon-ceramic Brembo brakes. The GTE also uses Ohlins four-way adjustable suspension elements. The drive train is able to adjust power output at each corner. This means that there is use of both positive and negative torque on the outside and inside wheels respectively for sharper handling. In addition, drivers can switch driving modes, select the surface, alter the regenerative braking as well as control the power going to the front axle.

According to Drako Motors, production of the GTE super sedan will be limited to just 25 examples each with an eye-watering price tag of $1.25 million (the Tesla seems like a bargain now). The brand has also mentioned that they have started assembling the EV with the first production unit set to be delivered later this year.