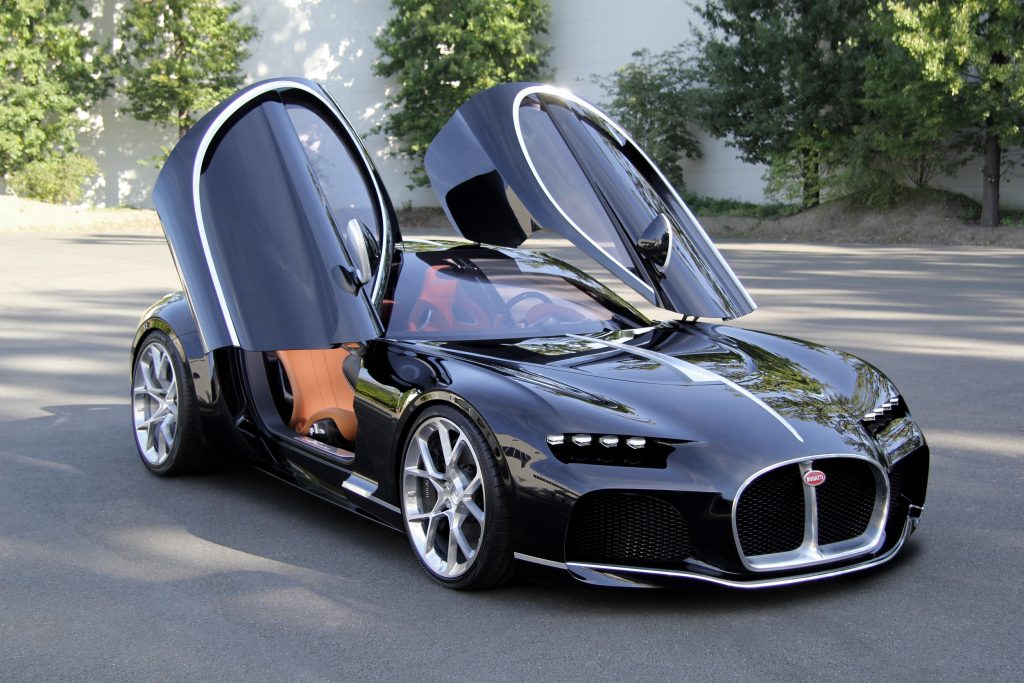 Since it joined Volkswagen in 1998, Bugatti has released two cars. The Veyron and the currently in production Chiron (plus all the variants based on it).

During the 2010s, Bugatti executives envisioned a three-car range and now we get to see (for the first time ever) what might have been with this pair of Coupe concepts thanks to the folks from Autoblog.

The idea was to forge a three-model range made up of a coupe called Atlantic positioned at the bottom of the company’s line-up, the Chiron released in 2016, and an ultra-exclusive, uber-expensive range-topping model with a W16.

The Bugatti Atlantic was created as a two-seater with a carbon fibre monocoque and parts sourced from other Volkswagen-owned brands when appropriate. As you can see in the shots, it has very different proportions to the Veyron and the Chiron and actually points to the Bugatti heritage styling with a long hood. At the time, Bugatti decided to use one of the group’s V8’s rather than chopping a W16 in half.

The development work continued and soon the designers started focusing on a larger model. While the Atlantic wore an almost retro-inspired look, the W16 Coupe (temporary internal name) went in a bolder direction with a front end inspired by the Veyron Barchetta (read at the end) and an almost Chiron-like backside. It never made it past the drawing board so it only lives on thanks to a couple of design sketches shown here.

“It’s quite a bit bigger; it has the same proportions [as the Atlantic] but it’s as exclusive as it gets. Nothing here is off the shelf, nothing here has anything to do with the group. This is almost like developing a race car,” said Achim Anscheidt, the head of Bugatti’s design department explained, adding total production would have been limited to a handful of units likely priced above $15 million, and possibly north of the $20-million mark; Bugatti never made a final business case for it. Guess we know where the La Voiture Noire got its inspiration from in styling and price then?

Anscheidt noted that the Bugatti Atlantic was tentatively scheduled to make its public debut at the 2015 edition of the Pebble Beach Concours d’Elegance. Unfortunately, the launch was pushed back and the delay proved fatal.

“Our president at the time, Wolfgang Dürheimer, pulled all the strings just to get Bugatti to a black zero so we were at least not costing the group money. We needed to be on the safe side to avoid being sold off from one day to another, because, in the first year, nobody could really judge the dimensions of the coming financial catastrophe. Everything was play it safe. It stayed that way for us for nearly two years,” Anscheidt explained.

Luckily for us, the Chiron was at a much more advanced stage in the development process otherwise it might also have been scrapped.

“We were five months away from the 2016 Geneva Auto Show where we planned to unveil it,” Anscheidt explained. He candidly told Autoblog that executives would have otherwise pulled the plug on the project to save as much money as possible.

Before all of this, Anscheidt explored many projects, one he shed light on is a Barchetta-like open-top two-seater (shown below) based on the Veyron Grand Sport. Its proportions are recognizably Veyron-like, but the similarities end there. Its front end wears vertical lights and bigger grille flanked by wide air intakes, styling cues later seen on the Divo.

If built, the Veyron Barchetta would have arrived as a limited-edition model with a correspondingly high price tag, in part to offset the sky-high development costs.

Bugatti
Share. Facebook Email Twitter LinkedIn WhatsApp Telegram
Previous Article5 Tips to Keep Your Car Safe in Winter
Next Article What Are The Effects Of Drunk Driving On A Family?