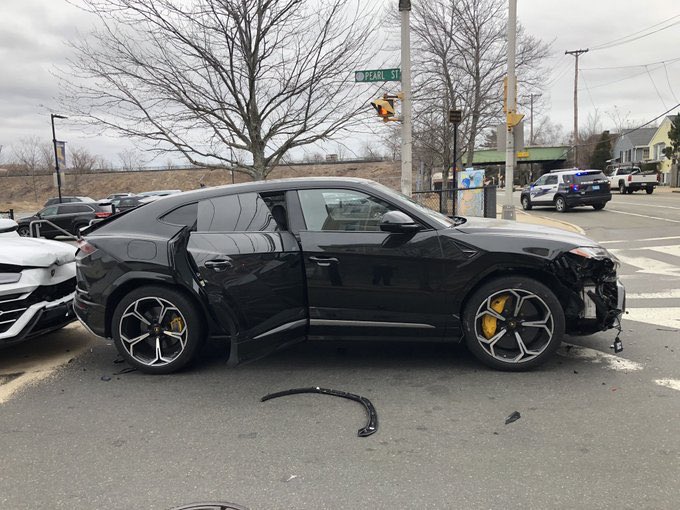 Early on Monday morning (17th February at 03:00), officers from the Wayland Police Department, outside Boston, responded to a commercial burglar alarm. It was at the local Lambo dealership, Lamborghini of Boston.

The first police officer had not even reached the dealership yet when he saw two Lamborghini Urus’ and a Chevrolet Cruze. When he turned on the blue lights, the Lamborghini’s took off and the occupants of the Cruze were arrested on the spot as neither of the two youths had a driver’s license or “authority to operate the vehicle in their possession.”

The Super SUV’s did not get far because just 20 miles away (32 km) at 08:00, they recovered the cars and apprehended one of the thieves. Unfortunately for the Raging Bulls, they did not make it through the ordeal unscathed as the two idiots behind the wheels managed to crash into each other.

The photos and video posted by Michael Henrich suggest one of the Urus’ rear-ended a Kia Soul and was, in turn, rear-ended by the other Urus. As a result, both models suffered significant front end damage but will hopefully be repaired.

Lamborghini of Boston took it pretty well it seems as they posted a message on Facebook saying “We think an Urus post is the best fit for today.”