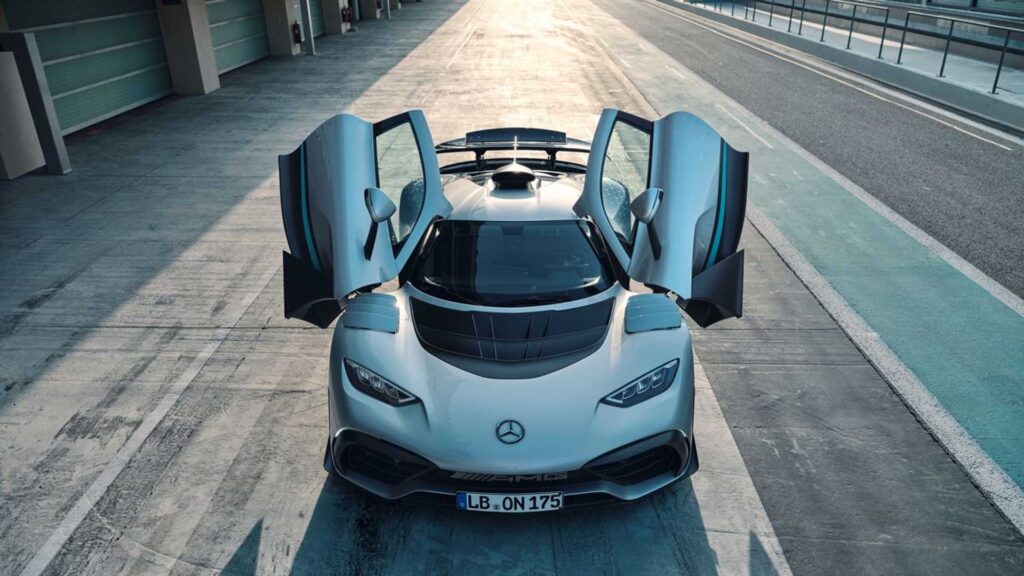 Five and a half years later and here we are with the Mercedes-AMG One production car.

It is finally alive and it delivers on all the promises they made. There’s an F1 engine at its core. It is road legal. And it packs a combined 1,049 hp (782 kW) from its hybrid powertrain.

“With the Mercedes-AMG One, we have more than pushed the boundaries. The immense technical challenges of making a modern Formula 1 powertrain suitable for everyday use on the road have undoubtedly pushed us to our limits,” said Philipp Schiemer, chairman of the management board for Mercedes-AMG. “Many may have thought, during the development period, that the project was impossible to implement. However, the teams in Affalterbach and Great Britain never gave up and believed in themselves. I have the greatest respect for all the participants and I am proud of this teamwork.”

As one would expect, we are very much interested in the heart of the hypercar, the F1 engine. Sure it has been a massive source of frustration for the team but the 1.6-litre V6 engine spins to a glorious 11,000-rpm redline, using a single turbocharger with electric assist. The engine utilizes double overhead camshafts, air spring valves, direction injection, and a complex exhaust gas cleaning system to produce 566 hp (422 kW) on its own. Added to this are four electric motors combining to give a total output of 1,049 hp (782 kW).

Two motors are located in the front, one at each wheel generating 322 hp combined. The third motor is installed with the F1 engine, sending 161 hp (120 kW) to the crankshaft. The fourth motor is the one tied to the high-tech turbocharger, which Mercedes-AMG says adds another 121 hp (90 kW) to the mix. That motor can also recoup energy from the turbo as exhaust gases spin it up, which can be sent elsewhere.

The Mercedes-AMG One is a plug-in hybrid so does not need an enormous number of batteries. In fact, it packs just 8.4 kWh of lithium-ion batteries which allows it to go 18 km (11.2 miles) on electric power alone.

This hypercar has been designed for ultimate performance and although Mercedes has not disclosed how much downforce is available, you know it is substantial thanks to a host of active aero components. There are active spoilers on the front diffuser, ventilation slots in the front wheel arches and of course that significant rear wing. In Race Plus and Strat2 programs under Track mode, Mercedes says downforce is five times higher than in normal highway mode. A third mode called Race DRS is a low-drag mode for reaching top speed.

Hope inside and you might just feel like you are in a Formula 1 car. There are some snug sculptured seats, a rectangular F1-style steering wheel and two 10-inch digital screens.

We know all 275 units have been spoken for a long time ago but what we don’t know is if it will have a go at grabbing the Nurburgring lap record. Rumours have long been whispered about Mercedes seeking a Nurburgring record with its benchmark hypercar. Now that it’s official, could such a run be in the making?

For now we must just enjoy the fact that it is official and for those interested, it will be making its public debut towards the end of June at the 2022 Goodwood Festival of Speed.

Mercedes-AMG
Share. Facebook Email Twitter LinkedIn WhatsApp Telegram
Previous Article10 Most Common Transmission Problems in New Orleans and How to Fix Them
Next Article Heavy or Light – The Choice of an Ebike with Its Weight