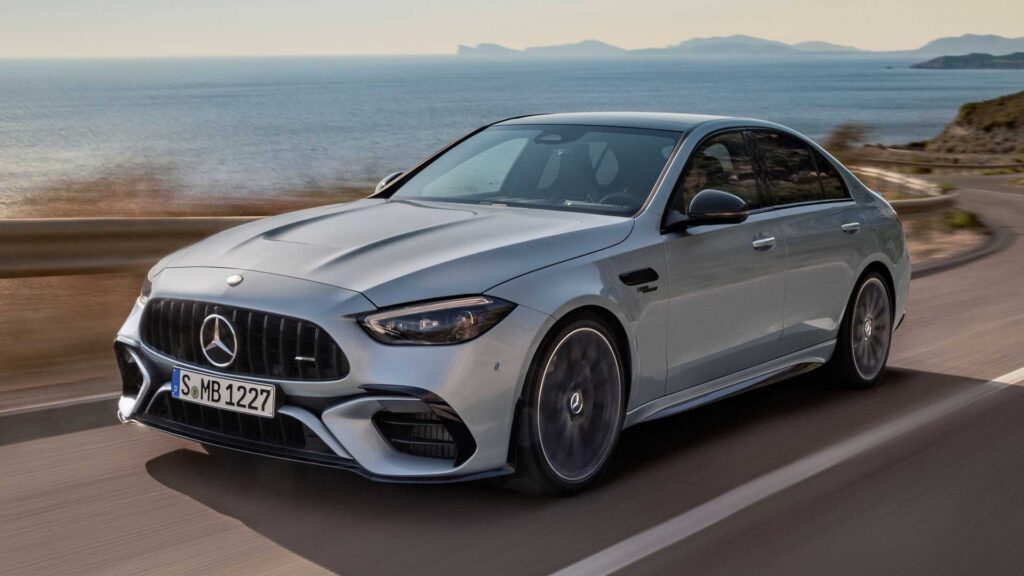 Purists look away as the all-new Mercedes-AMG C63 S now gets the E Performance suffix and waves goodbye to the majestic 4.0-litre V8.

If you are more worried about performance over sound and theatre, then you will be excited because this new C63 S packs some serious numbers and some serious tech.

So let’s start with the highly controversial powertrain. Yes, folks, the new Mercedes-AMG C63 S E Performance makes use of the M139 which is a 2.0-litre turbocharged four-cylinder. Just this unit alone delivers a ridiculous 476 hp (350 kW) which comfortably makes it the most powerful production four-banger on the planet. It features an electrically driven turbocharger that reduces lag to almost imperceptible levels. Derived from Formula 1 technology, the turbocharger features a tiny electric motor between the exhaust turbine and the compressor wheel, which spins the turbo up to create boost as soon as the driver calls for it.

These days, 476 hp is simply not enough so the new AMG gets a rear-mounted electric motor which delivers 204 hp (150 kW) thanks to a 6.1-kilowatt-hour battery and 400-volt electrical architecture.

Sending the power to the wheels is the familiar 9-speed multi-clutch transmission while the electric motor features its own two-speed gearbox, ensuring plenty of e-boost even when travelling at high speeds.

For the first time ever, the range-topping C-Class now offers all-wheel drive with the 4MATIC+ system. features an electronically controlled limited-slip rear differential, although the electric motor acts directly on the rear axle for a near-instant response. What’s more, a clutch system allows the electric motor to spin the driveshaft as well, which in turn rotates the front wheels. That means that even when operating in pure EV mode, the C63 always has four-wheel traction.

The sound will sadly not be as emotive as its predecessors but thanks to a few tricks, it will not be completely dull. There is a sensor in the exhaust that detects noise pressure and then enhances that through the stereo speakers for a more exciting soundtrack. They did not that this sound isn’t synthesized or altered, merely amplified, so the car will still sound like a turbocharged four-pot.

The styling is very much what we expected and in line with Mercedes-AMG’s current design philosophy.

The same applies to the interior where you will find the usual AMG-specific refinements to the infotainment system, including a track pace timer and a steering wheel–mounted drive selector with dedicated buttons for the exhaust and suspension. A variety of drive modes allow the person behind the wheel to tailor the suspension, throttle and brake response, steering, and propulsion noise to their tastes. Presets include Electric, Comfort, Sport, Sport+, Race, Battery Hold, and Slippery.

The arrival of the new Mercedes-AMG C63 S E Performance in South Africa can be expected in the first half of 2023.