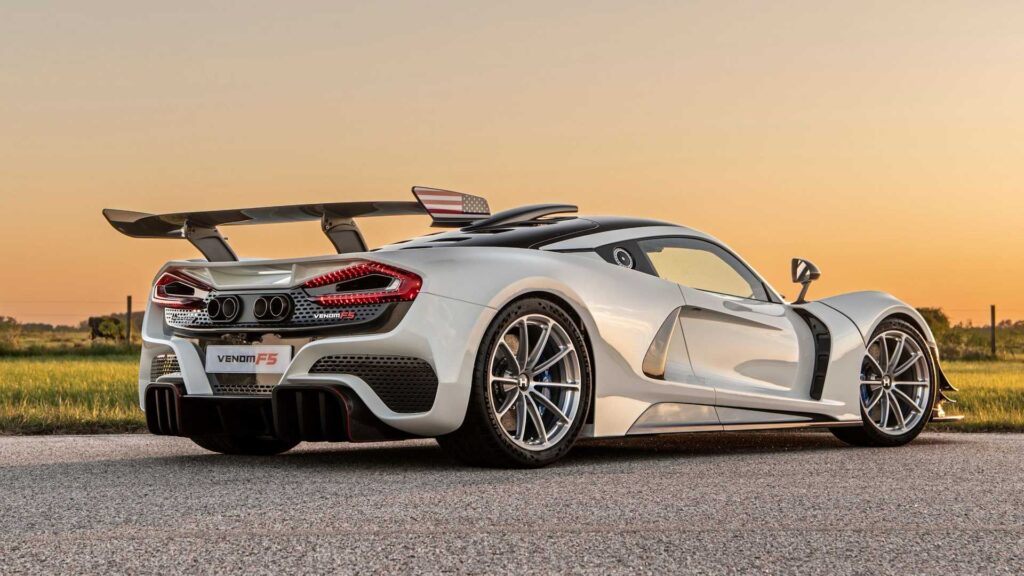 The ‘regular’ Hennessey Venom F5 is the most powerful combustion production car in the world and now they have made it even faster by stripping it out and creating this track-focused variant.

Touted as “an apex predator on a racing circuit”, the Venom F5 Revolution arrives as a $2.7 million (approx. R45m) limited-run hypercar setting its sights on many lap records.

Powering the Venom F5 Revolution is their insane twin-turbocharged 6.6-litre ‘Fury’ V8 engine, calibrated for competitive use. It produces the same 1,817 horsepower (1,355 kilowatts) and 1,617 Nm (1,193 lb-ft) but as we mentioned it has shed some weight giving it a much better power-to-weight ratio. The Revolution will likely go beyond the road car’s 2.6 seconds 0 to 100 km/h (62 mph) time and could even push further than its claimed 300 mph top speed.

As the title suggests, straight-line speed isn’t the only target with the Revolution, however, with new aerodynamics fitted to send the car around tracks as quickly as possible. This is most visible in the adjustable full-width carbon fibre rear wing, which can deliver more than 363 kg of downforce at 300 km/h (186 mph) and more than 635 kg at 400 km/h (249 mph). This is joined by a large new carbon fibre front splitter and the same rear diffuser as found on the standard car.

They will offer the track beast with an onboard track telemetry system, allowing for real-time monitoring. It tracks lap time, splits, cornering G-forces, and other information.

Hennessey plans to produce just 24 units for the world and according to them, many of them are already sold so if you fancy this weapon, get your wallet out quickly.

Check out the video below the gallery for that FURIOUS noise coming from those four exhausts.