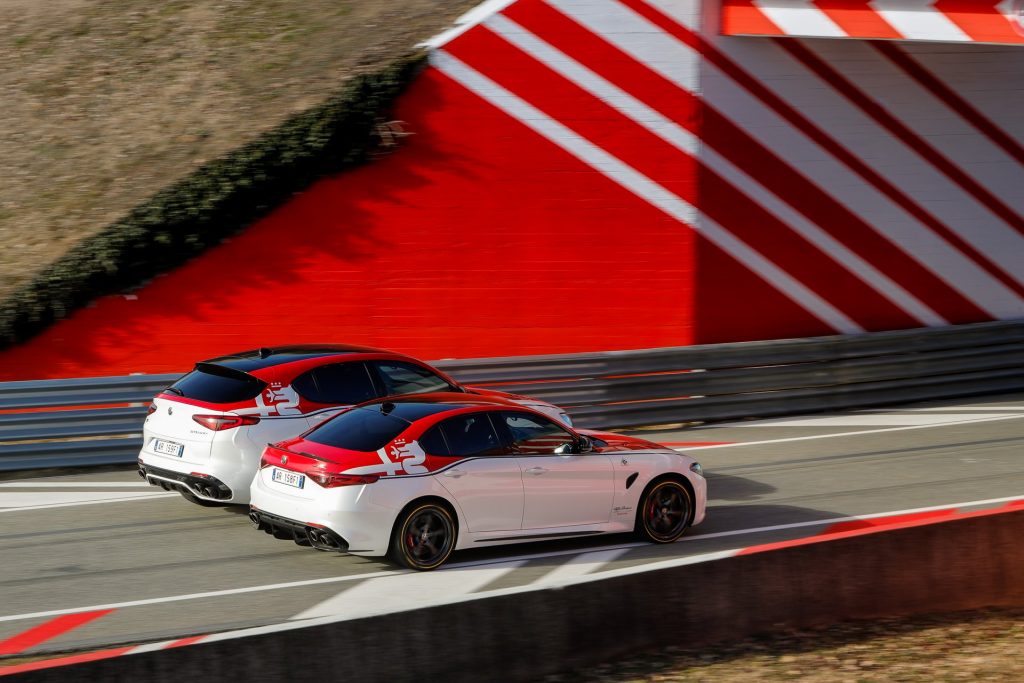 Alfa Romeo is set to be out in full force at this year’s Geneva Motor Show. The Italian automaker will be showcasing at least five new variants of their model range and at least one surprise.

The first pair of cars that Alfa Romeo will present to the world are the new, limited edition ‘Alfa Romeo Racing’ versions of the Giulia and Stelvio, in celebration of the company’s partnership with Sauber in Formula 1. Both models will be sporting paint jobs similar to the current Alfa Romeo Racing C38 F1 car. In the case of the Giulia QV ‘Alfa Romeo Racing’, Alfa has given it a carbon roof, 19 inch wheels and some lovely Rosso calipers. You will also have carbon-ceramic brakes as a standard option. The engine has also been tweaked a bit. No numbers have been released, but the 2.9-litre V6 has been fettled with by Alfa Romeo and will be paired with a titanium Akrapovic exhaust system.

In the interior, you’ll find some Sparco carbon-backed bucket seats with red stitching, a carbon Mopar transmission knob and a leather or Alcantara steering wheel.

Alfa Romeo will be showing the Ti versions of the Giulia and Stelvio in Geneva. In the case of the Stelvio Ti, it will have newer rear lights and get more generous offerings of carbon fibre around the car. It will also have 20 inch wheels paired with yellow calipers, gloss black exhaust pipes and window lining as well as privacy glass. The car will have the standard 4-cylinder, 2-litre turbo engine which puts out 276 horses (206 kW) mated to the 8-speed automatic gearbox.

The Giulietta will also be getting some attention. Alfa are showing the new Executive and Veloce versions of their hatchback. The Executive show car will feature a colour known as ‘Visconti Green’ with a dark brown interior with various satin finishes around the car. The Veloce will serve as the performance version of the Giulietta, with a 2-litre diesel engine that will push out 167 horsepower (125 kW) and no manual offering. Despite this being the ‘performance’ variant of the Giulietta, it would be very exciting to see a proper hot-hatch offering from Alfa Romeo. A Giulietta Quadrifoglio, anybody?