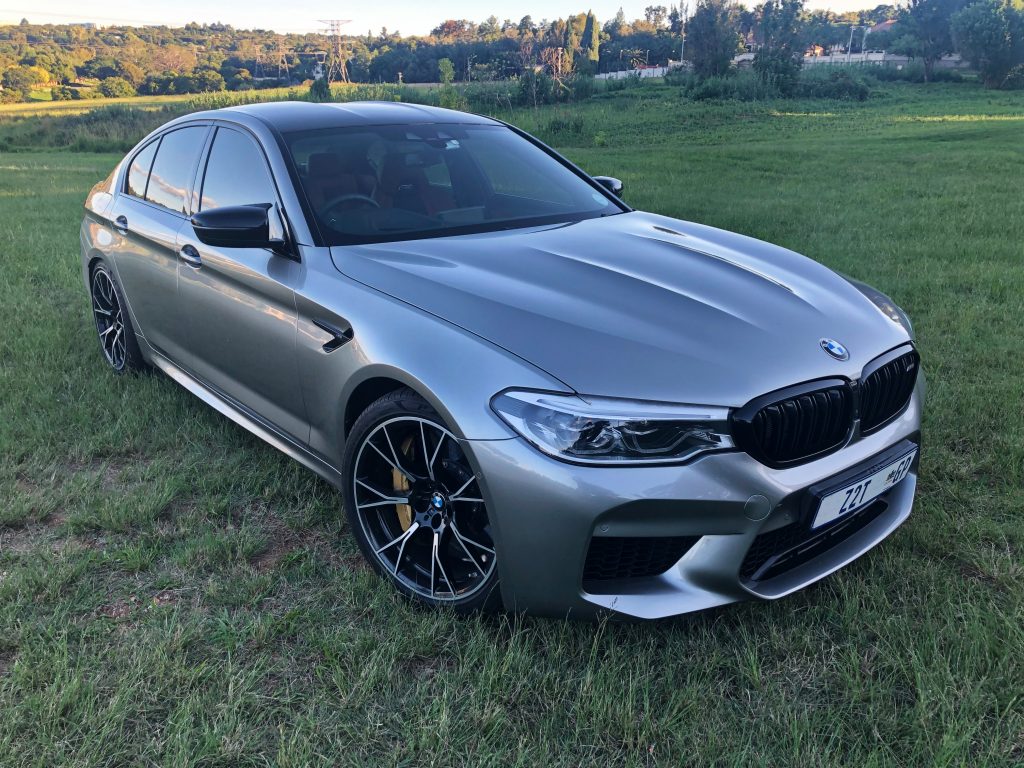 Towards the end of last year I got some time in the ‘regular’ M5 which is more than enough of a package for 99% of the high-performance sedan customers but the M5 Competition just takes things up a notch and is quite possibly the most ballistic creation from the BMW M crew ever.

You probably all know this by now but the M5 Competition packs the same twin-turbo 4.4-litre V8 as the M5 but power output has been cranked up to
460 kW (617 hp) with torque staying the same at 750 Nm (available across a slightly larger rev bandwidth). This means the super saloon can sprint to 100 km/h in a claimed 3.3 seconds (we think its quicker) and run to a top speed of 305 km/h if fitted with the M Drivers Package.

How does one tell it is a M5 Competition without looking at the rear badge? Up front you will see a high gloss black kidney grille. Moving down the side you will notice the side gills are gloss black too and it has been fitted with exclusive 20-inch forged lightweight alloy wheels. At the back the rear apron insert has also been finished in high-gloss black and the ear-cracking exhausts are finished in black.

So why would someone buy the M5 Competition over the regular M5? Well firstly you would have the fastest BMW M car ever built in your garage and if you are shopping in this league why would you shy from an extra R300k (Competition add-on).

Inside it is stylish, upmarket and very luxurious which is no surprise considering it is inspired by the flagship 7 Series. The M5-specific front seats are also sumptuously comfortable, while still providing plenty of support and bolstering. There is technology everywhere and I wont go on about that because you are reading this for the drive review but the 360 degree camera system makes the rather large car extremely manageable as a daily drive.

All 460 kW is sent to all four wheels (thanks to the superb xDrive system) via a ZF-sourced eight-speed automatic transmission. BMW decided to ditch the DCT for a more conventional auto transmission to not only aid with fuel economy but also because the M Division engineers said it woks better with the all-wheel drive system.

So how is it behind the wheel? Well when you do get a chance to put the hammer down your breath is literally taken away. The brute torque and power gets the super saloon booming toward the horizon (and a lengthy prison sentence if you are not careful). The exhaust that comes as standard with the Competition is utterly bonkers. With the engine in Sport Plus every time you release the throttle pedal the pops, bangs and crackles will turn heads streets away. Change down a gear and it sounds like a firing range behind you. Bystanders would expect to see something like a Lamborghini Huracan, but double take at the sight of a family saloon with two child seats in the back. It’s comical, artificial and rather silly, but very amusing.

Unfortunately the weather was not playing ball while I had the car so steered clear of the M5’s full-feral rear-wheel drive mode. With rain-soaked Johannesburg roads I did test the xDrive system to it’s limit and it is absolutely faultless. It drastically increased driver confidence and improves accuracy even with such enormous power outputs.

The M5 Competition is charming, flattering and is possibly the best all rounder I’ve ever driven. The Mercedes-AMG E 63 S 4Matic+ is of course the natural rival to the M5. Having spent time in both cars (Merc on the track only) I can say with a fair amount of confidence that the M5 would be the choice for me.

BMW seem to have answered the age-old enthusiast question: you can never have too much power. With a base price of R2,062,306 this package does not come cheap but you got SO much car that it is almost justified. Cars are expensive these days and creations like this will always be expensive so get used to it.

Take a bow BMW as this M5 Competition is as thrilling, talented and just better than it has ever been before. I want one!