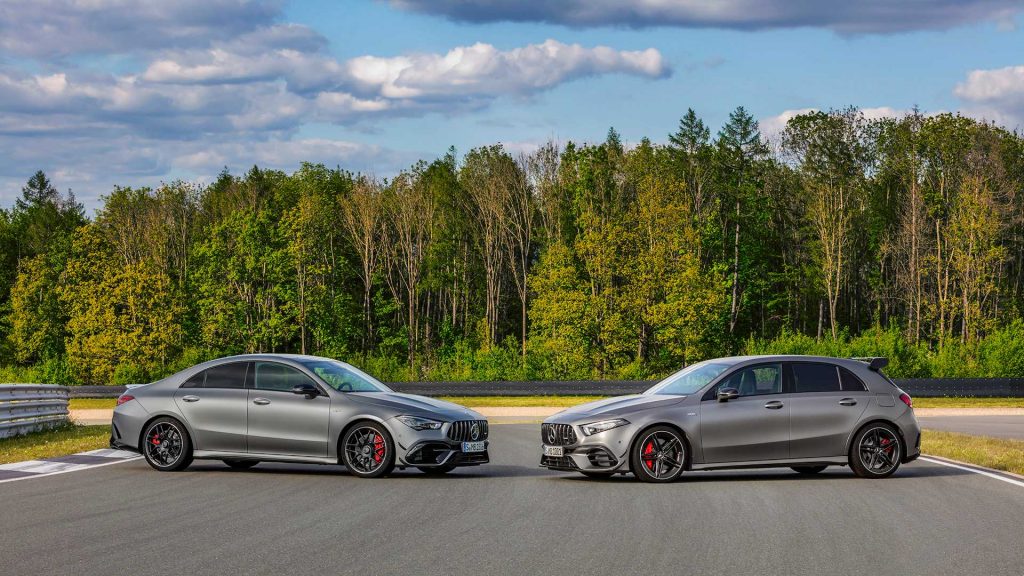 Unlike the previous generation of the 45 range, these new AMG’s have spawned an even hotter ‘S’ version offering more power and other upgrades.

The menacing grille up front and quad exhausts at the back immediately lets you know this is a level up from the ’35’ variants. In addition, both feature front canards and a more aggressive rear end with a roof-mounted spoiler in the case of the hatchback and a prominent trunk lid spoiler for the sedan. Beefy wheel arches further denote we’re dealing with the range-topping versions of the two model lineups.

The base variants of the A 45 and CLA 45 ride on 18-inch alloy wheels as standard whereas the ‘S’ models are fitted with a 19-inch set. Opt for the flagship version and Mercedes will replace the gray-painted brake calipers of the base model in favor of larger red calipers with black ‘AMG’ lettering instead of white.

The highlight of these cars is most certainly the newly developed turbocharged four-cylinder engine. The 2.0-litre unit called M139 produces 382 hp (285 kW) and 480 Nm (354 lb-feet) of torque in the standard model and an impressive 416 hp (310 kW) and 500 Nm (369 lb-ft) in the ‘S’. Regardless of the one you go for, the engine is hooked up to an eight-speed, dual-clutch automatic transmission and a 4Matic+ all-wheel-drive system.

As far as performance is concerned, the base A 45 needs four seconds flat to reach 100 km/h (62 mph) from a standstill and is electronically capped at 250 km/h (155 mph). You can opt for the AMG Driver’s Package that will unlock a maximum velocity of 270 km/h (168 mph), which is still electronically governed. The A 45 S will complete the sprint a tenth of a second sooner, in only 3.9 seconds, and hit the higher top speed right from the start.

When it comes to the CLA 45 and the CLA 45 S, they’re both a tenth of a second slower than the equivalent A 45 model due to a slightly higher weight.

Regarding the drift mode that has been extensively teased, it’s standard on the S model and optional for the non-S cars. The tail-happy nature of the two cars can be accessed by enabling the Race driving mode, turning off the ESP, and switching the transmission to manual mode.