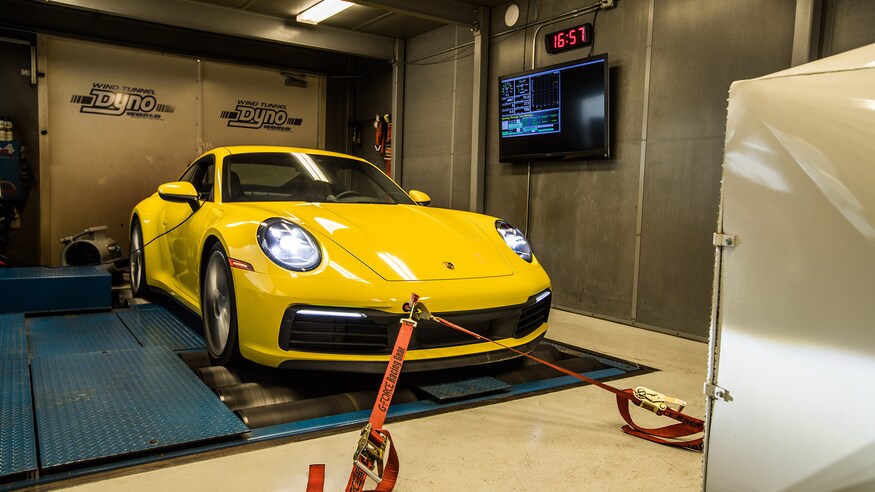 We are all familiar with the capabilities that Porsche has to make powerful red-lining screamers such as the 520 hp GT3 RS. The boffins at Porsche have also demonstrated plenty of forced-induction proficiency with the twin-turbo flat-six found in the 690 hp GT2 RS. So the question Motor Trend is asking today has to do with the turbocharged, water-cooled lump sitting over the rear axle of the new 992-generation 911 Carrera S; how much power is this new Porsche really producing?

The publication took a Racing Yellow 2020 911 Carrera S for dyno testing to find out what it really makes. From the factory, Porsche claims that the Carrera S produces 443 hp (330 kW) and 529 Nm of torque from its 3.0-litre flat-six, but one note to keep in mind is that those numbers are rated to the crank. Those numbers won’t be directly translated to the numbers the Porsche will put down on the dyno. A dynamometer or better known as a dyno, measures how much power and torque make it to the ground, or in this case, the cylindrical drums on which the car is driving during testing on the dyno.

Some of the power, as well as torque produced at the crank, is used to spin the transmission, driveshaft, differential and half shafts before reaching the wheels. For that reason, wheel horsepower and wheel torque will always be lower than the numbers measure at the crankshaft. The percentage of losses are very hard to measure and they vary from car to car. However, a 15 percent drivetrain loss is an approximation which is usable. That said, here are the numbers from the dyno. The 2019 Porsche 911 Carrera S produced an average of 414 hp (309 kW) and 550 Nm of torque at the wheels over three dyno testing runs, all in fourth gear.

If one takes a careful look, you will notice that this 911 is putting down more torque at the wheels than Porsche claims it produces at the crank. Keeping in mind the 15 percent drivetrain loss, these numbers theoretically translate to the Porsche producing 487 horses (363 kW) and 648 Nm at the crank.

As this car is an early build, it’s hard to tell if its dyno performance represents the figures of the standard production 992 Carrera S. If so however, one will be getting a lot more power and torque than they had bargained for. Not many 911 buyers will be complaining at that fact.