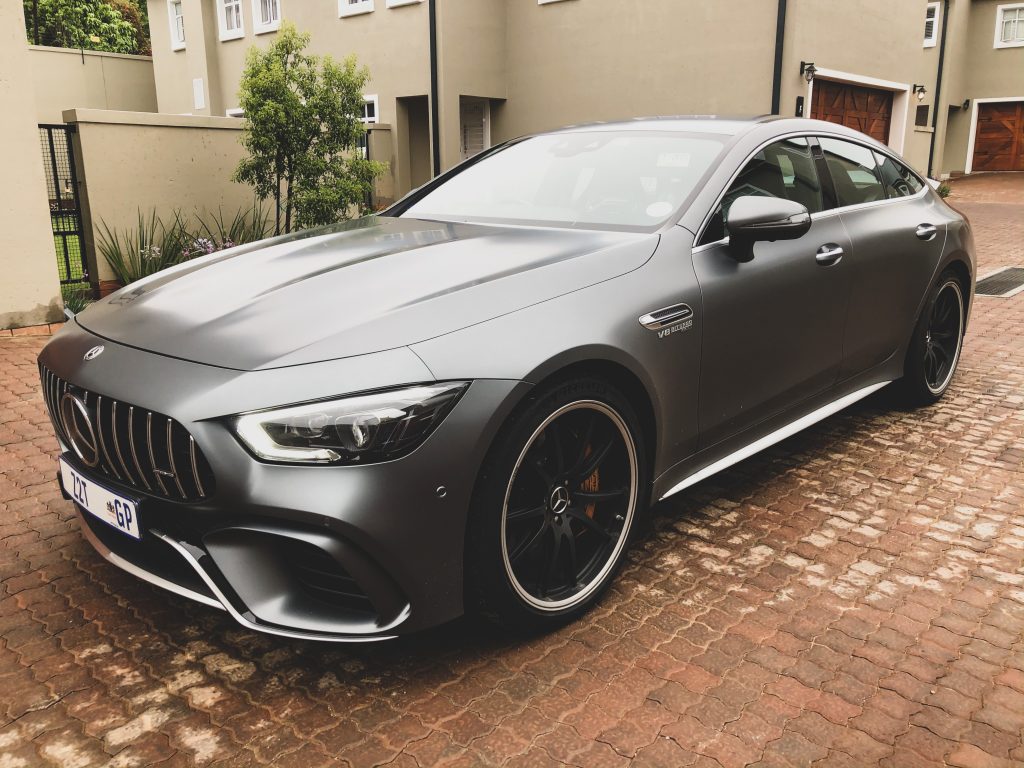 When the big Mercedes-AMG GT 63 S 4-Door Coupé was revealed half the world thought AMG had gone dilly but they had a strong business case. There are plenty of folks out there who fancy the styling and performance of the AMG GT range, but need something with cargo space for long trips or to be able to ferry around friends and family. Now having driven it, we’re left in awe of its performance as well as its surprising practicality and let’s not forget it is the current record holder for fastest four-seater production car on the legendary Nürburgring Nordschleife.

We don’t need to waffle too much about the design and styling because quite simply, it’s stunning. Specific design elements are of course inspired by the AMG GT Coupe, including the wide air intakes up front, slim taillights along the rump and the Panamerica grille with its vertical slats. Some variants have a fixed rear spoiler (Aero package) while others have a speed-activated (or button activate) pop-up wing.

The interior is pure class and quality and is a nice evolution over the regular GT with a wide, raked centre console that houses controls for things like stop/start, stability control, exhaust, driving modes and more. The flat-bottomed steering wheel is part Alcantara part carbon fibre (it is an option) and physical controls for exhaust and drive settings are nicely placed at the 4:30 and 7:30 positions.

The 63 variants include a number of model-exclusive performance technologies that place it much higher than the GT 53. For starters, the GT 63 comes with an electronic locking rear differential, as well as the Drift Mode first introduced with the E 63. The GT 63 models also get rear-wheel steering for better cornering and larger compound brakes and the 63 S model rolls on 20-inch wheels as standard.

Under the rather large hood sits the familiar 4.0-litre twin-turbo V8 cranked all the way to a beefy 630 hp (470 kW) and 900 Nm of torque which actually makes it more powerful than the mighty AMG GT R. Of course, it is substantially heavier but the all-wheel-drive 4MATIC+ system uses all the torque in an astonishing neck-straining way.

Press the loud pedal to the floor and the big sedan will sprint to 100 km/h in 3.2 seconds and run all the way to 315 km/h if you are brave enough. In dry conditions, there is not an inch of power wasted on wheelspin and the snappy AMG SPEEDSHIFT MCT 9-speed sports transmission keeps you engaged as the V8 growl urges you on. You better keep an eye on the speedometer or you could find yourself in a spot of trouble because even a light foot can lead to speeds that will catch the eye of your local copper.

It’s astonishing to climb into something so big and feel such raw and never-ending power. The in-gear acceleration reminded me of the Aston Martin DBS Superleggera.

The steering is surprisingly weighty and delivers more than enough feedback for a car this size. You can be quite aggressive with your speed and input into corners because the combination of the traction control system and the sticky Michelin Pilot Sport Cup 2 tyres seem to have endless grip.

The ride may be a bit harsh for urban driving but on the highway, this floats along in Comfort mode and absolutely demolishes the miles.

With a starting price of R2,922,531, you will not see many of them on the road and you would be hard-pressed it is worth the roughly R900k premium it commands over an E63 S sedan but at these sort of numbers, who is counting? Value is where you find it and if you simply want the meanest most potent luxury sedan in the range, this is what you buy.

It’s as impressive dynamically as it is desirable. It looks great and goes like hell, not just in a straight line but around corners, too. If we were after a slick four-door with earth-rotating torque, this would be it.