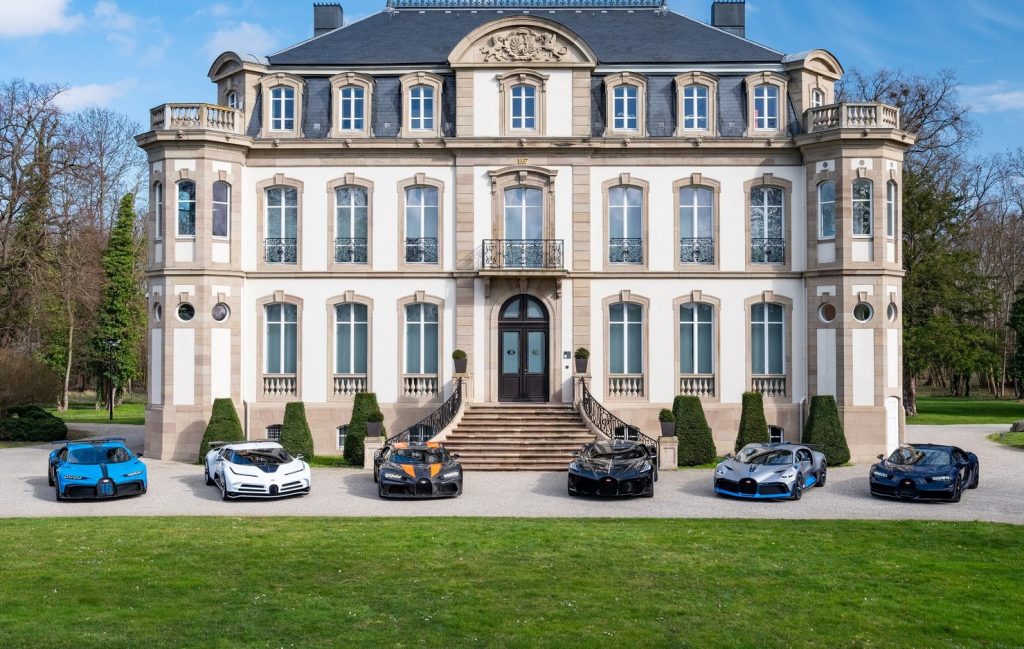 Seeing a Bugatti Chiron is a special occasion on its own but seeing this lineup including the most expensive new car in the world is just something special.

The manufacturer assembled six Chiron variants at the Château St. Jean in Molsheim, France and some simple maths brings the total (estimated) value of the cars to just under $44 million.

Billed as an “unparalleled” grand touring coupe, the La Voiture Noire is a one-off model that draws inspiration from the Type 57 SC Atlantic. It packs a quad-turbo 8-litre W16 engine that produces 1,479 hp (1,103 kW) and 1,600 Nm of torque. It reportedly sold for $18.7 million dollars to Ferdinand Piech*, former chairman of the Volkswagen Group.

The Divo packs a $5.8 million price tag and is limited to 40 units each packing the same output as the La Voiture Noire.

The Super Sport 300+ is the special machine that broke through the 300 mph barrier last year and packs the same menacing output as the Centodieci. Pricing for this car is said to be $3.9 million and will be limited to 30 units.

The Chiron Pur Sport is the latest offering from Bugatti and is their most track-focused offering yet. Bugatti plans to build just 16 examples each with a price tag of around $3.4 million.

The ‘regular’ Chiron Sport will cost just less than the Pur Sport at about $3.2 million but still packs the menacing 1,103 kW and 1,600 Nm of torque.

*Piece passed away in 2019 so the car could still remain in the family or someone else may have decided to purchase it.