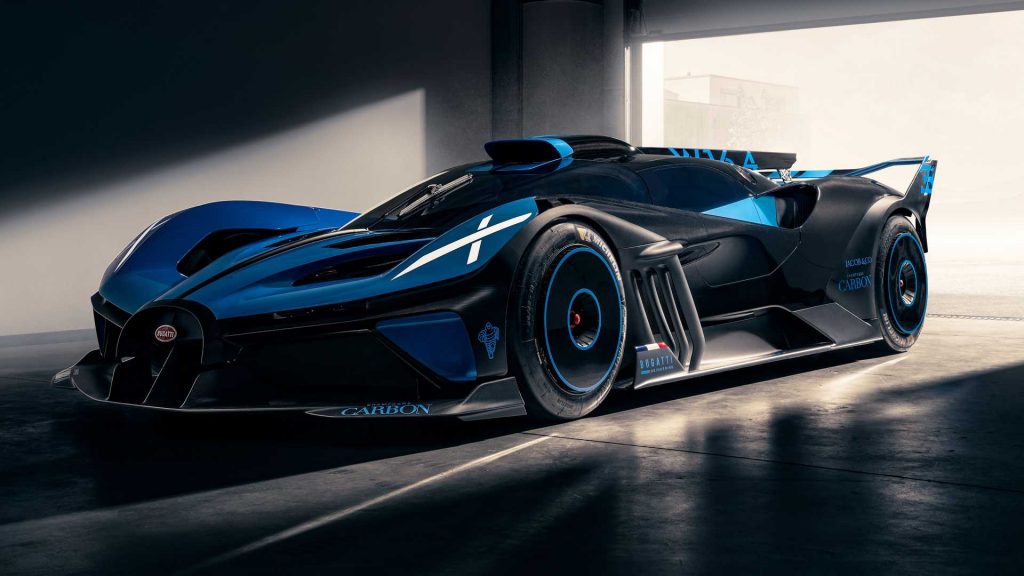 Bugatti took the virtual covers off the Bolide concept in October but they did not release a single image of the actual car. Now they have decided to gift us with a gallery of the mind-warping track-only beast.

In the race-ready Bolide, the unrestricted W16 engine generates 1,825 hp (1,361 kW) thanks to a host of changes that includes new turbochargers and a tune for 110-octane racing fuel, to name just a few.

The Chiron platform was pretty much stripped and infused with loads of carbon fibre, titanium and anything that will save weight. As a result, the Bolide is almost half the weight at 1,240 kg.

The radical body shape and aero is said to generate the same level of downforce you find in Formula 1 cars and with such an enormous amount of power behind the driver, it can annihilate lap records around the world.

Bugatti says it will lap Le Mans in 3 minutes 7.1 seconds, and cover the 12.9-mile Nürburgring Nordschleife in just 5 minutes 23.1 seconds. That’s nearly as fast as the Porsche 919 Hybrid EVO, which holds the current absolute ‘Ring record at 5 minutes 19.5 seconds.

There is a catch to this though as Bugatti states they have not done any laps on real circuits yet. The times presented in Bugatti’s announcement are simulated figures, but if the power, weight, and downforce stats are accurate, it certainly has the capability to go for the gold.

For the moment the Bolide is a one off that belongs to Bugatti but lets see if their uber-wealthy customers can convince them to build a limited run.

Bugatti
Share. Facebook Email Twitter LinkedIn WhatsApp Telegram
Previous ArticleGymkhana 2020: Travis Pastrana Pilots 634 kW Subaru and Jump Over a Boat
Next Article 2020: A Reflection On The Race To Vehicle Autonomy This Past Year