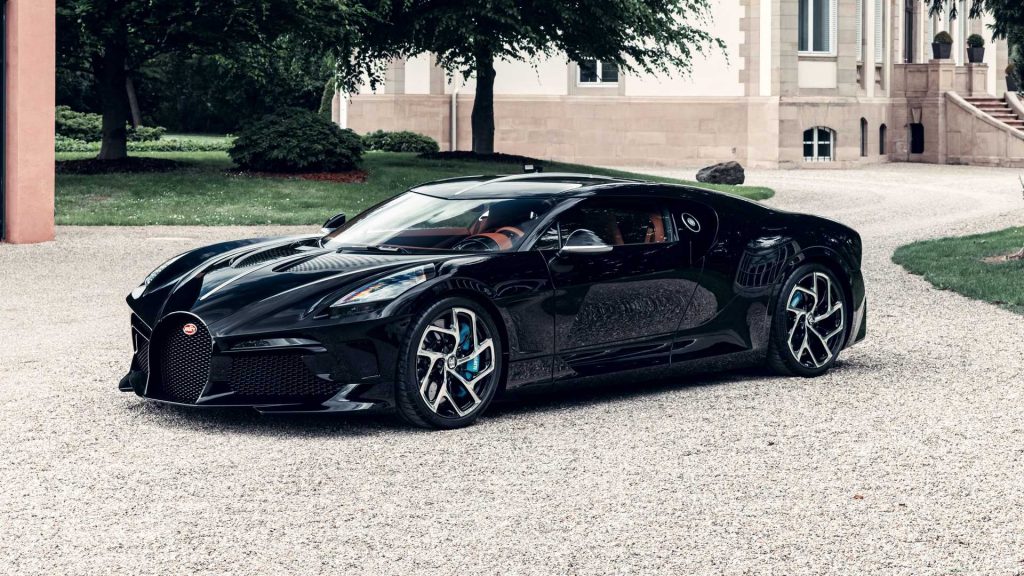 Just last week we saw the Rolls-Royce Boat Tail announced which immediately bumped the Bugatti La Voiture Noire out of position 1 for the most expensive new car ever made but that does make this one-off murdered out hypercar any less impressive.

Seen here is the final version which will be heading to a lucky owner who paid €11 million before taxes.

If this is the first time you are seeing or hearing about this car, then you should know that it is a modern-day interpretation of Jean Bugatti’s lost Type 57 SC Atlantic and took two years to develop. Some 65,000 engineering hours have been invested to finalize the Chiron-based unique creation, which has completely bespoke bodywork and an extended wheelbase. Yes, the six exhaust tips are still very much there, dominating the car’s imposing rear end.

La Voiture Noire is 450mm longer than the original Chiron while the distance between the axles has increased by 250mm. The swooping body sports visible carbon fibre in combination with a clearcoat known as black carbon glossy. This finish “generates virtually no reflections, but plenty of tension and drama” says Bugatti.

The headlights are made of more than 25 individually milled elements in each light cluster. Bugatti has confirmed that this was plenty of work for a one-off but we know they are not ones to skimp on details. Even the front-grilled has been 3D-printer while the ultra-wide LED light strip at the back boasts a single-piece surround with no joints – a first for a Bugatti.

Bugatti gave us a bunch of official images of the final product but unfortunately, the gallery does not include any shots of the interior.

“With the La Voiture Noire, we are paying our respects to our long tradition, to France, and to Jean Bugatti’s creative work,” says Stephan Winkelmann. “At the same time, we are bringing exceptional technology, aesthetics, and extreme luxury into a new age. The La Voiture Noire is at the cutting edge of automotive engineering. It is a sculptural beauty that boasts unique technology.”

On a side note, we are expecting to see a new Bugatti model later this year with many rumours pointing to a one-off Roadster but we will keep you all updated on this.