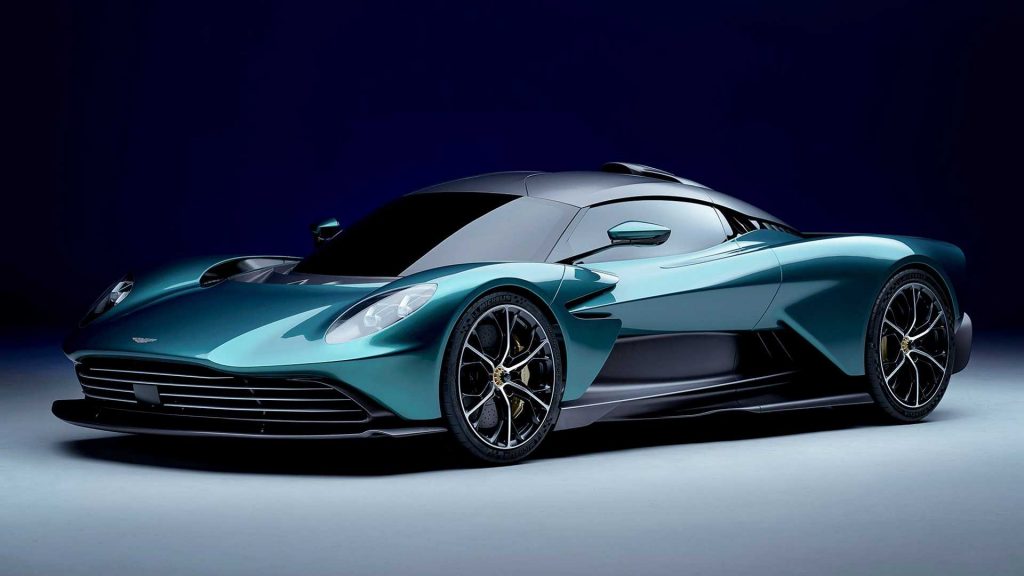 Aston Martin gave us the ‘first look’ at the Valhalla in March 2019 at the Geneva Motor Show when they revealed the AM-RB 003. Nearly two and a half years later and here is the official production version of the Valhalla.

In March this year, the manufacturer announced that the in-house twin-turbo 3.0-litre V6 would not be happening and they would rather use a rear-mid-mounted twin-turbo 4.0-litre V8. They are calling it a “bespoke V8 engine” but we can only assume it has its roots in Affalterbach (AMG).

This particular V8 features a flat-plane crankshaft, leading us to believe it’s related to the V8 installed in the AMG GT Black Series. This combustion engine works with a pair of electric motors (one for each axle) to deliver a combined output of 937 hp (699 kW) and 1,000 Nm (738 lb-ft) of torque. This punch enables the supercar to sprint to 100 km/h (62 mph) in just two and a half seconds and top out at 330 km/h (217 mph). “The most advanced, responsive and highest-performing V8 engine ever fitted to an Aston Martin” also breathes through a lightweight exhaust system that exits through the top of the rear deck and contains adjustable flaps that give “an authentic Aston Martin sound character”.

The power is sent to the road via an eight-speed, dual-clutch automatic transmission Aston Martin says it was exclusively developed and built for the company, with a focus on hybrid performance machines. It comes along with an electronic limited-slip differential on the rear axle and boasts a fully electric reverse mode by utilizing the two e-motors. Doing so shaves off weight by eliminating the conventional reverse gear.

Aston Martin is targeting a Nurburgring lap time of 6 minutes and 30 seconds which would make it 13 seconds quicker than the previously mentioned GT Black Series.

Chief creative officer Marek Reichman explained how the Valhalla’s different positioning from the Valkyrie necessitated a unique design approach: “When we created the Valhalla concept, we were keen to emphasise the design legacy of the Aston Martin Valkyrie and that intent remains unchanged, but the execution has evolved considerably in order to reach production of this all-new car. Though the legacy of Valkyrie is clear, Valhalla is now a more mature, fully resolved piece of design.”

The Valhalla will now be prepared for a market launch in the second half of 2023, with Aston Martin F1 drivers Sebastian Vettel and Lance Stroll called upon to offer feedback on the car’s dynamic performance.

Prices and availability have yet to be announced, but Reichman said at the Geneva show concept’s unveiling: “If the Valkyrie is the best of the best, then the Valhalla is the best at £1m”.