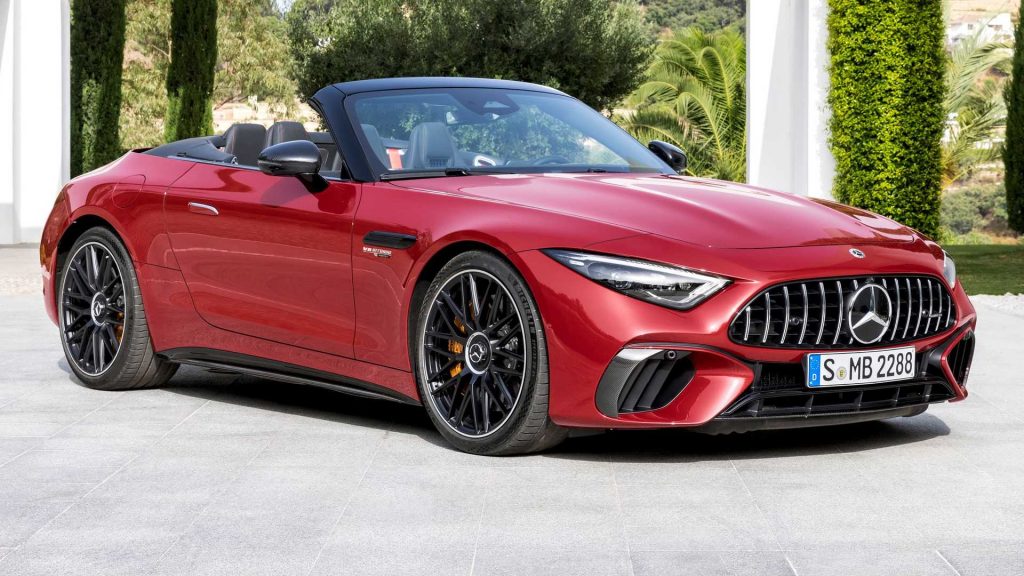 The SL nameplate has been around for almost 70 years and now the latest generation, R232, is here and it is pretty much an entirely new car.

The new Mercedes-AMG SL will be replacing the GT Roadster and will also be an AMG-only model sporting a sharper exterior featuring the menacing Panamericana grille with vertical slats flanked by angular headlights similar to those of the CLS.

The rather sleek side profile makes use of pop-out electronic door handles and thanks to the use of fabric for the roof, they shaved off 21 kg (46 lb). The roof can be opened and closed in 15 seconds at speeds of up to 50 km/h.

At the rounded rear, you will find the typical quad-exit exhausts as well as an active rear spoiler which comes with no fewer than six settings. If you want more aero, you can add the optional Aerodynamic Package which brings in beefier flics for both bumpers, active aero in the front underbody, and a chunkier rear diffuser.

We have already seen the interior in full which sports the latest MBUX infotainment system featuring a large portrait-oriented display. The car is a 2+2 for the first time since the R129 generation SL from the late 80s and 90s, although by the brand’s own admission the rear seats are suitable only for people shorter than 1.50m.

An E-Performance hybrid version of the new SL has been confirmed. However, Mercedes has not yet revealed if this will be based on the new plug-in hybrid V8 system in the AMG GT 63 S E-Performance, which produces a colossal 831 hp (620 kW), or on the four-cylinder plug-in hybrid engine hotly rumoured to be under development for the next AMG C 63. Nonetheless, AMG Boss Schiemer confirmed that four-cylinder versions of the SL will appear in some form.

The new Mercedes-AMG SL for the first time ever will come with all-wheel drive, specifically the 4Matic+ setup with variable torque distribution and an electromechanically controlled clutch linking the permanently driven rear axle with the front wheels. The power is sent to the road via a nine-speed automatic transmission equipped with a launch control function. To improve the turning circle as well as sharpen the handling, it will also benefit from clever rear-wheel steering.

If we were to hazard a guess, we think only the SL 63 model will make its way to South Africa and that would likely be towards the end of 2022.