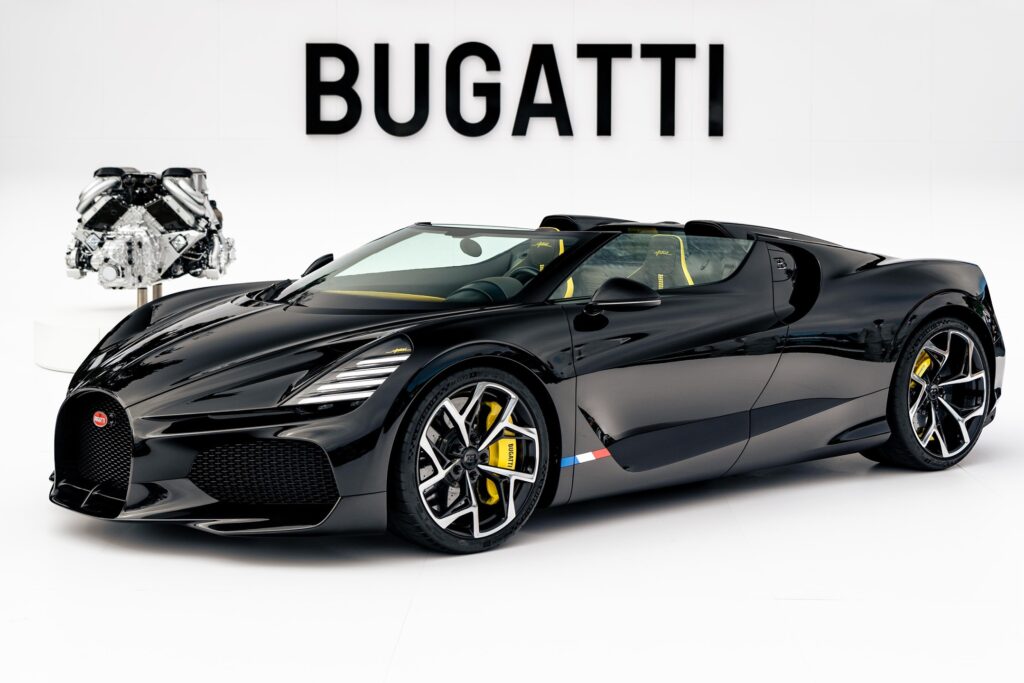 Bugatti took the covers off the simply stunning Mistral Roadster at Monterey Car Week last week and after seventeen years of service, Bugatti’s mighty W16 engine is bowing out with a 420 km/h (261 mph) drop-top hypercar.

As you would expect, the Mistral’s core is the Bugatti Chiron but makes use of a redesigned carbon fibre monocoque to provide open-air motoring. For the lucky 99 owners, it features the most powerful version of the quad-turbo motor – a Chiron SuperSport-derived 1,578 hp (1,177 kW) 8.0-litre unit.

This hulk of an engine is paired with its seven-speed dual-clutch gearbox which as mentioned hits 261 mph (420 km/h). Bugatti is rather keen to grab the title of the world’s fastest roadster which means it will have to push through its claimed top speed and knock the Hennessey Venom GT Spyder off the top (265.6 mph).

Styling-wise, the Mistral seems to be a nice combination of the Divo and La Voiture Noire in a roadster package with an “X” motif for the taillights reminding us of the track-only Bolide. The rear light configuration has allowed Bugatti to install vents in between the X beams for cooling purposes.

Despite the significant bodywork revisions, the interior remains much the same as the Chiron but the gear lever becomes the focal point in this creation. It’s machined from a solid block of aluminium, with wood trim and a transparent amber insert. Buyers can embed small sculptures and items into the amber, which features a Rembrandt Bugatti ‘dancing elephant’ statue as standard.

As mentioned, Bugatti will make only 99 units of the Mistral and plans to kick off deliveries in 2024 when the first of the 40 Bolide track cars are also destined to reach their rightful owners. While the Bolide was available for €4 million apiece, the Mistral has a sticker price of €5 million and yes, as usual, they are all spoken for.