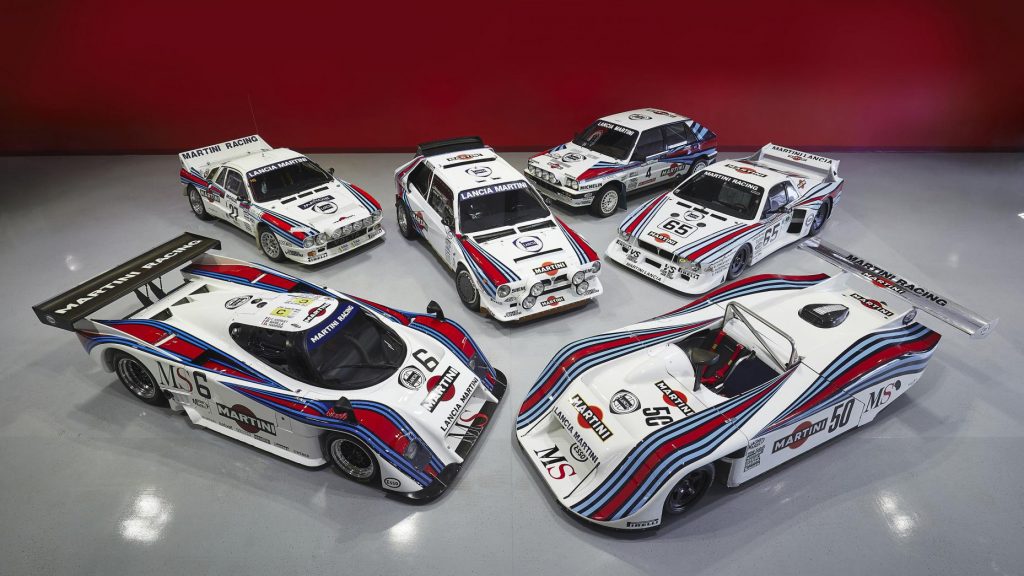 If you happen to read this article and also happen to have around $7.5 million (approx. R110 million) lying around, then you would be crazy not to buy this group of Martini liveried Lancia’s.

The picture above shows the six-strong ‘Campion Collection’, a group of Martini-striped Lancias up for sale now via London’s Girardo & Co.

Not only does it look absolutely menacing thanks to a Pininfarina body, but it also sits on a Dallara chassis and is powered by an Abarth engine. The engine was a 1.4-litre turbo four delivering 460 hp (343 kW) which was plenty considering it only weighed 780 kg. It was also the first works Lancia to race at Le Mans since the 1950’s.

This bonkers looking thing actually won the Nurburgring 1000km in 1982 and is one of only four ever made. It has been labelled as Italy’s first ground-effect sports car and was also powered by the 1.4-litre Abarth albeit detuned to 430 hp (320 kW) but the car weighed a ridiculous 665 kg.

Another Lancia endurance racer from the eighties which was driven by four-times Le Mans winner Henri Pescarolo. Powering the race car was a 720 hp (537 kW) 3.0-litre V8 sourced from Ferrari and since it weighed just 850 kg, you can imagine how rapid it was.

One of the most iconic (if not the most iconic) Lancias ever with just 20 made. Powered by a 2.1-litre supercharged Abarth engine it sent 325 hp (242 kW) to the rear wheels via a five-speed manual gearbox. This was the last car to win a World Rally title with rear-wheel-drive.

A Group B rally beast that won the 1986 Rally 1000 Miglia and lists World Rally Champions Markku Alen and Miki Biasion on its driver list. The 1.8-litre supercharged and turbocharged engine produced a whopping 550 hp (410 kW) which was enough to hit 60 mph (96 km/h) on gravel in just 2.5 seconds.

It debuted at the 1988 Rallye de Portugal and won it. It went on to record 36 World Rally stage victories as a works Lancia Martini Racing entrant. 275 horses (205 kW) was delivered from the 2.0-litre four to all four wheels via a six-speed manual.