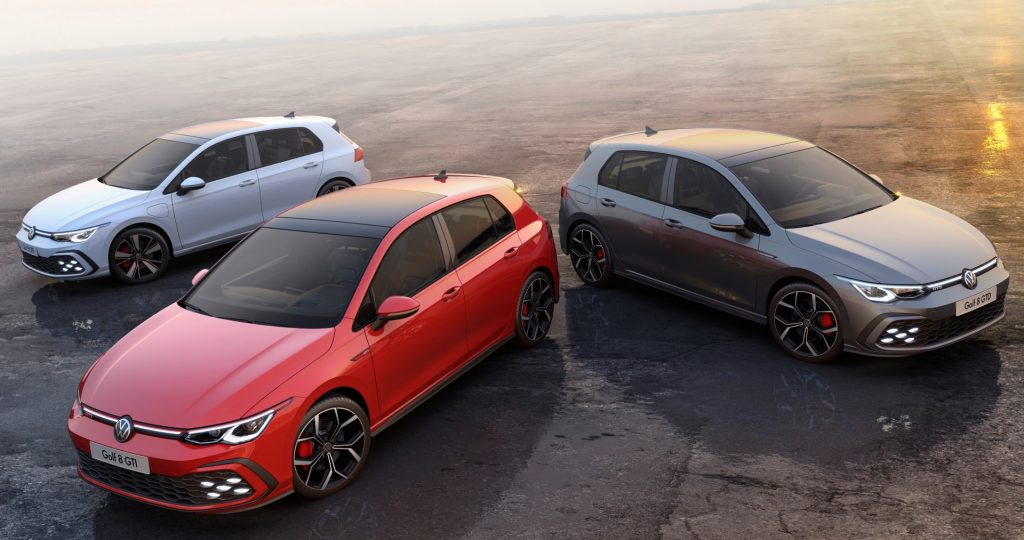 The Geneva Motor Show is just a few days away now but Volkswagen decided to give us our first look at three new golf variants before the chaos of the show begins.

Styling-wise you will notice a few key enhancements like the light-up bar above the radiator grille, which also features specific red accents for the GTI. The LED light clusters you see in the honeycomb grille are a significant feature but sadly (for some reason) VW has made this an optional extra. The new GTI sports a slightly redesigned wheel covering the signature red calipers but you do have the choice of other wheel options which look a lot better.

At the back, you will see new LED taillights and a modified slanted rear spoiler with the iconic red GTI logo sitting under the VW badge in a new font.

Inside you get a new 10-inch infotainment system that sits above the centre stack, digital gauges, and ambient lighting with 30 colours to choose from. If you wish you can spec a 10.2-inch digital cluster as an optional extra which includes navigation integrated into the centre touchscreen.

As it expected, it makes use of a turbocharged 2.0-litre four-cylinder that mates to a standard six-speed manual, or optional seven-speed dual-clutch DSG transmission. It produces 241 hp (180 kW) and 370 Nm of torque. The new GTI uses a McPherson front axle and multi-link rear suspension, though there is a new adaptive chassis control system. Known as DCC, the system reacts to road conditions, while also taking into account steering input, braking, and acceleration to change the adaptive dampers almost instantly.

You still get the GTI looks but at the back, there’s a special rear fascia with dual exhaust tips exiting the left corner (GTD) and fake trapezoid exhaust cutouts at the corners (GTE).

Inside you can expect much the same as the GTI but the cockpit is flush with blue accents as opposed to the GTI red.

The GTD features a 2.0-litre turbodiesel generating 197 hp (147 kW), but it exceeds the GTI version in the torque department with 400 Nm. As standard, you will get a seven-speed DSG transmission for shifting duties.

The GTE plug-in hybrid uses a turbocharged 1.4-litre engine making 147 hp (110 kW) and a single 114 hp (85 kW) electric motor. Combined, they match the GTI’s total output of 241 hp (180 kW), with torque being equal to the diesel at 400 Nm. Being a plug-in hybrid, the GTE is also capable of electric-only operation for approximately 60 km and at speeds up to 130 km/h. A six-speed DSG is the only available transmission.