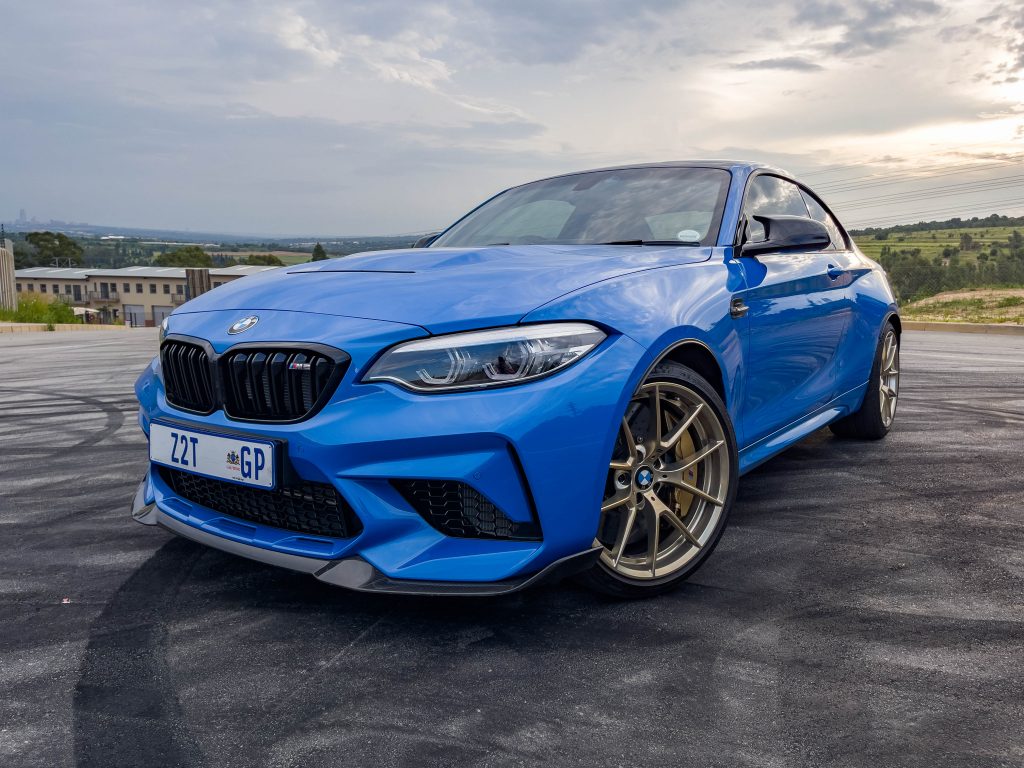 We were fortunate enough to hop behind the wheel of the highly-anticipated BMW M2 CS at Kyalami Grand Prix circuit towards the end of last year but we were also very intrigued as to how it behaves on public roads and day to day driving.

Compared to the M2 Competition you will notice a the front bumper has been enhanced with a carbon fibre splitter. There is also a carbon fibre reinforced plastic bonnet with a sexy central air vent as well as a carbon roof. At the back there is a larger carbon rear spoiler as well as a reworked carbon diffuser and finally some sleek lightweight 19-inch forged aluminium wheels. Not only do these updates give the M2 CS a much more aggressive look but also provides greater downforce compared to the Competition variant.

The interior will not blow anyone away and although we understand the minimalist track-focused approach, we doubt the added weight of a centre console armrest with storage would make a difference.

So what sits under the hood then? It is the same S55 unit found in the outgoing M3 and M4 generation but in this application, the 3.0-litre twin-turbo inline-six delivers 444 hp (331 kw) and 550 Nm of torque. That is a 29 kW gain over the M2 Competition while torque remains the same.

Drive is sent through a standard six-speed manual or, optionally, the seven-speed dual-clutch automatic gearbox used by our test car to the rear wheels. There’s also a reworked electronically controlled Active M Differential that has been tuned specifically for the M2 CS.

A short stint in the car on track and you know you are behind the wheel of most likely the best driver’s car BMW produces right now. It is hard to think of any other current BMW model, either standard or from its M performance car division, that delivers quite the same combination of performance, balance and attitude.

We unfortunately did not get a go with a manual variant and if you are buying a car like this for pure driver engagement, then surely you would want the third pedal. The very reason for this car is to create a more intimate connection between driver and machine so if we were buying, we would certainly consider the six-speed manual even if it costs you a second or two in lap-time potential.

The chassis is superb and with added stiffness it is truly engaging and adds a heightened degree of directness and urgency of movement via a heavily retuned suspension.

A few laps behind the wheel around Kyalami straight after a M2 Competition sample and you will certainly agree that it is a better drivers car but what about using it on public roads as a daily? Well thanks to the use of adaptive dampers (a first for any M2), it is actually better to drive as a daily too.

The BMW M engineers have managed to make the M2 CS both firmer and more comfortable. There is less body roll, it feels more composed and yet it actually rides better over bumpy surfaces.

To be honest, the handling benefits of the BMW M2 CS on the road are negligible as we know the M2 Competition is already capable of tackling any sort of on-road behaviour you throw at it.

The M2 CS is everything we expected it to be. It is a noticeably keener, more incisive, and ultimately more entertaining car to drive than the M2 Competition on the track. We would have loved the soundtrack to be a bit more raucous but thanks to the dreadful OPF fitted there is very little theatre. This problem can be solved by installing a full BMW-approved Akrapovic system which removes the OPF but you will need to fork out nearly R200k for this system.

So do you buy one over the M2 Competition? We simply have to say no to this based on pricing alone. The M2 CS retailed from R1.6 million making it around R500k more expensive than the Competition variant. With just 30 units making their way to our shores, 20 units were auctioned off for well above their retail price which topped out at R2.135 million for a unit with a dual-clutch transmission and carbon ceramic brakes. That sort of money gets you in to a very low mileage M5 Competition and that is a whole lot more car.

Only time will tell if the M2 CS prices increase in South Africa, making the initial 30 owners very happy, or if they take a ‘tumble’ and someone in the future ends up snagging a M2 CS for its actual retail price or less.

So yes this is technically the best driving BMW on the market but that is only because its starting point is already so fantastic. It is up to you to decide if you want to spend that much more money for something that is just a bit better.

That said, we are genuinely grateful for being able to spend some time with this special M car on track and on the road.