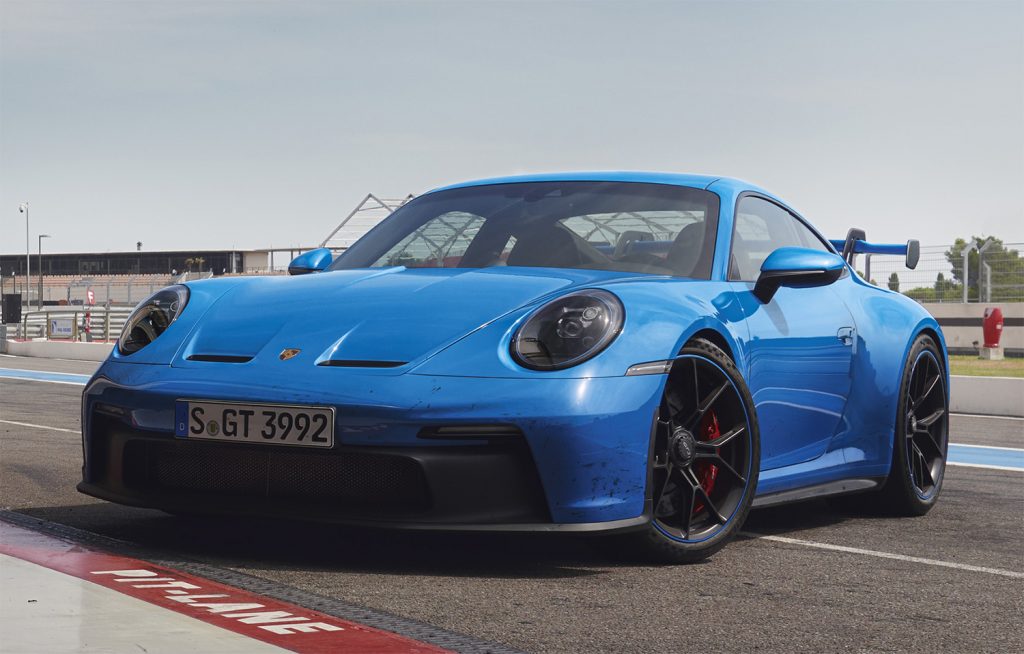 To get the weight down the engineers replaced more metal parts with lighter carbon-fibre-reinforced plastic, including for the hood, rear decklid and rear wing. As expected, the rear wing features swan-neck struts. By mounting to the top surface of the wing, there’s more surface area on the bottom side of the wing and as a result more downforce. It’s a design taken straight out of motorsport, though we’re sure not everyone will be pleased. Don’t worry, a GT3 Touring model minus the wing is also coming.

Upfront you will find an adjustable lip spoiler and diffuser that can be set up in stages for track use. The rear wing is also adjustable. As a result, the GT3’s aerodynamics can be switched between a street setup and a performance setup. The latter increases downforce by up to 150% over the outgoing GT3, and even the street setup generates about 50% more downforce than before.

For the first time, there is a double-wishbone front axle. It’s a completely new setup compared to the previous car and also features in the GT3 Cup racer.

The GT3 rides on 20-inch wheels at the front and 21-inch pieces at the back. They are about 1.6 kg (3.5 pounds) lighter than the wheels on the previous GT3. A set of street-legal track tyres are available as an option, and this is the same rubber from the car’s Nürburgring lap.

Inside you will find a new Drive Mode button on the steering wheel and a sleek PDK gearshift lever. The four-way-adjustable Sport Seats Plus are standard, but buyers can option 18-way Sport Seats Plus or carbon-fibre Full Bucket Seats, which cut about 11.79 kg (26 pounds).

The pricing will be revealed at a later stage with orders opening next month.