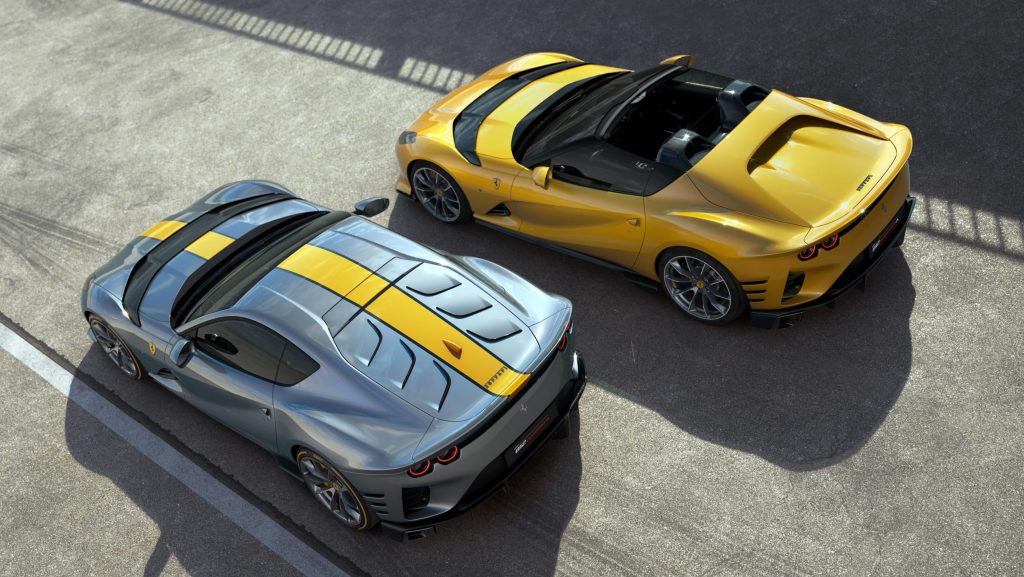 As we already know, it is powered by the same 6.5-litre naturally-aspirated V12 found in the 812 Superfast but thanks to a host of mechanical upgrades, it delivers 818 hp (610 kW). The upgrades consist of new con-rods, new pistons, a new intake manifold, and a redesigned crankshaft. The ECU’s fuel map has also been revised, while the rev-limiter has been lifted to an incredible 9,500rpm.

Power is sent to the rear wheels via a recalibrated version of the 812’s seven-speed dual-clutch automatic gearbox, which Ferrari says reduces shift times by five percent. Thanks to the added power and a lower kerb weight, the Competizione will rip to 100 km/h (62 mph) in a claimed 2.85 seconds, before reaching a top speed of “more than 211 mph (340 km/h),” according to Ferrari.

The latest evolution of Ferrari’s four-wheel steering has been implemented in the new Competizione models for added agility, along with aero upgrades derived from Formula 1 cars used during the 2010s. The latter was possible after switching from the Superfast’s quad circular exhausts to a pair of angular tips to enable an interaction between the exhaust gases and the enlarged diffuser to boost downforce.

Inside, the 812 Competizione is more familiar. The car’s dashboard, steering wheel and infotainment system are all carried over from the 812 Superfast. However, the door cards have been redesigned using lighter materials, while the centre console gets the same H-gate themed gear selector found on Ferrari’s newest models, such as the Roma GT car.

At the moment no pricing or availability has been revealed but we are expecting both models to be limited and more than likely already sold out.

Ferrari
Share. Facebook Email Twitter LinkedIn WhatsApp Telegram
Previous ArticleBugatti Pool Table Will Set You Back Over R4 Million
Next Article Own A European Car? Here Are All the Reasons Why You Need a Specialist