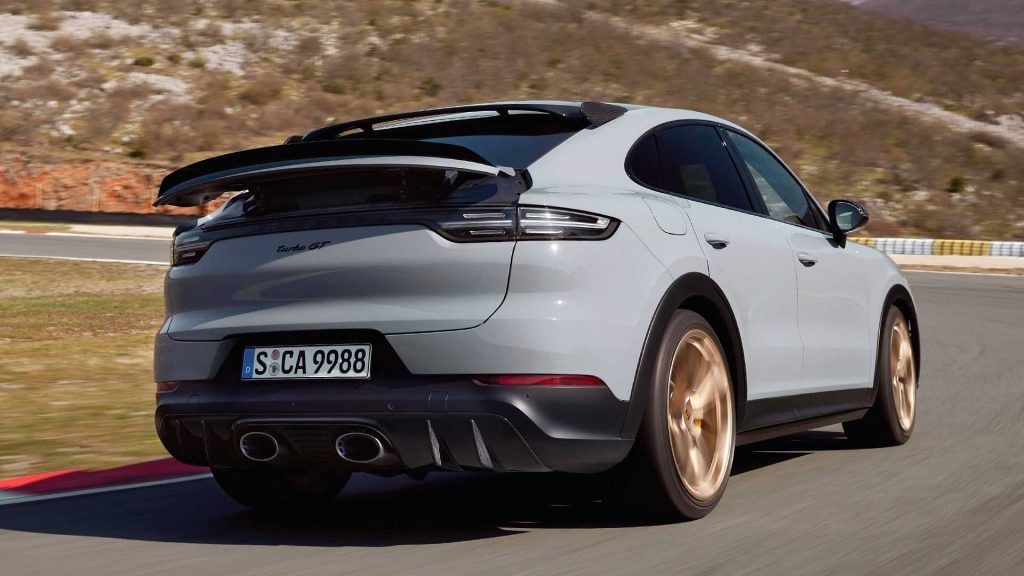 We already knew that this hotter Cayenne variant had grabbed the Nürburgring Nordschleife record for production SUVs and now we know it will be called the Cayenne Turbo GT.

This new grunt runs through an eight-speed automatic with modifications to make shifts quicker. There’s also a water-cooled transfer case for the Porsche Traction Management system. The Cayenne Turbo GT is capable of a 0 to 100 km/h (62 mph) sprint in a rapid 3.3 seconds which makes it one of the fastest, if not the fastest, accelerating ICE-powered production SUV in the world. The quarter-mile comes up in 11.6 seconds, and the top speed is 300 km/h.

The Turbo GT receives suspension that is 17 mm lower than what is found on the Cayenne Turbo model while the three-chamber air suspension is up to 15 per cent stiffer, depending on the selected mode. Rear-wheel steering and Power Steering Plus systems are also said to imbue the GT with faster steering and handling.

Styling-wise, you will find a slightly revised front fascia with larger intakes on the sides and a more pronounced lower lip. The roof, rear diffuser cover, and side plates for the rear wing are all carbon fibre. The adaptive spoiler has a 2.0-inch (51-millimetre) gurney flap, which makes it twice the size of the one on the Cayenne Turbo Coupe.

At the back, you will spot a pair of oval-shaped central exit exhaust pipes which are titanium and lack a centre muffler allowing the system to shed just over 18 kg.

Inside, there’s seating for four, including a pair of chairs in the back. The ones in front are eight-way adjustable. All of them have center sections in perforated Alcantara with contrasting stitching in Neodyme or Artic Grey. There’s “Turbo GT” embroidery on each headrest. A yellow strip is at the 12 o’clock position on the steering wheel.