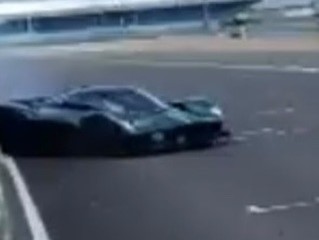 Towards the end of last year, we saw the first customer Aston Martin Valkyrie which was “ready for delivery” but some electrical gremlins have delayed the start of deliveries.

We have already seen and of course, heard the track-only Valkyrie AMR Pro and now we get to see another road-going prototype on track at Silverstone.

This time it was not as glamourous as you will see in the short 11-second clip below it was nearly a catastrophe for this prototype.

You can see the hypercar losing control and veering toward the barrier. Fortunately, the driver was able to regain some control at the right time to avoid a heavy collision with the wall. There was definite contact but a very lucky result nonetheless.

It is unclear if it was a lack of grip due to cold tyres or insufficient rear downforce.

Aston Martin
Share. Facebook Email Twitter LinkedIn WhatsApp Telegram
Previous ArticleI Was Hit By An Underage Driver! What Should I Do?
Next Article Tips for preparing for an International Motorcycle Tips