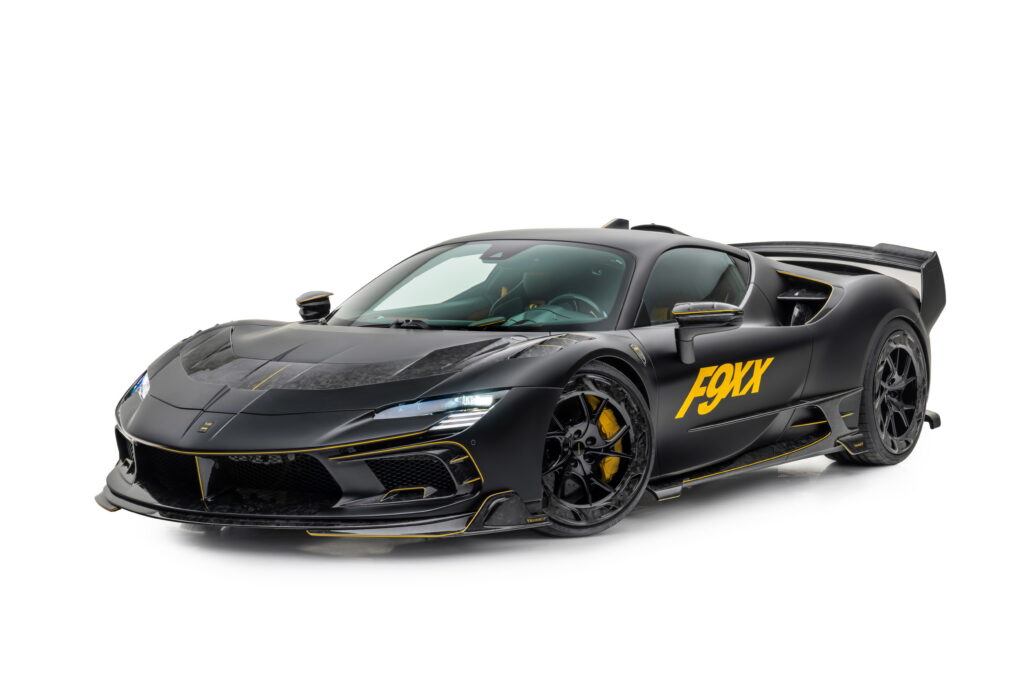 We have already seen what Mansory is capable of with the Ferrari F8 and now they have followed that up with the ‘F9XX’ based on the SF90.

Just like the F8 soft kit, this is available for both the SF90 Stradale and SF90 Spider.

The full conversion includes a drastic body kit that transforms the look of the supercar into something closer to a Ferrari XX model (hence the name).

You will find enlarged air intakes in the front apron, which ensure the flow of fresh air to the high-performance radiators at all times. Together with the specially developed front lip, this also results in significantly improved downforce on the front axle.

There are some rather prominent side sills that not only add to the ‘visual pleasure’ but also act as air ducts, supplying large quantities of fresh air both to the power unit under the new full-carbon engine hood (with a scoop on the Coupé, without on the Spider) and to the rear braking system.

The newly developed double diffuser is responsible for perfect guidance of the airflow underneath the vehicle and for downforce on the rear axle, the large rear spoiler in conjunction with the rear apron, which also generates additional downforce. An impressive 4-pipe exhaust system rounds off the rearview harmoniously and powerfully.

Performance has been increased too as the twin-turbo 4.0-litre V8 now pushes out 967 hp (721 kW) and 980 Nm to the crankshaft instead of the already impressive 770 hp and 800 Nm as standard. In conjunction with the support of its three electric motors (two on the front axle and one for the rear axle), the “MANSORY F9XX” thus delivers an incredible system output of 1,085 hp (809 kW).

The visuals are finished with a set of “YT.5 Air” wheels which are one-piece, ultra-light forged and newly designed rims in 21 and 22-inches.

In typical Mansory style, they went to town on the interior but for once, it is not overdone. The seats, which are upholstered on half sides in yellow leather, are the visual highlight of the interior and create an atmosphere that perfectly combines high functionality, comfort and exceptional design.