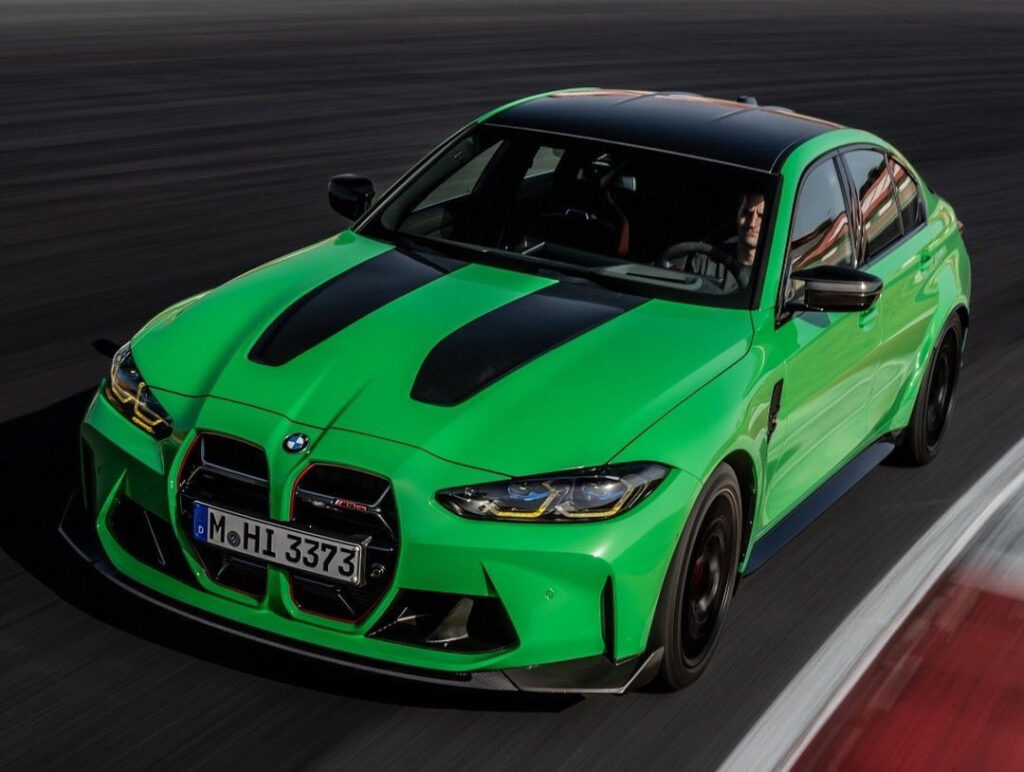 The BMW M3 CS was set to be unveiled next weekend but this is 2023 which means keeping leaks off the internet is pretty much impossible.

Images posted to Bimmerpost shows off the new sports sedan in a bright green paint which seems to be Signal Green.

As expected, the BMW M3 CS looks like an M4 CSL ‘lite’. It isn’t quite as extreme as the M4 CSL but it does share a lot of the same design features. For instance, it has the same kidney grille and two stripes on the hood, similar to the CSL’s. However, the latter of which are smaller and lack red accents. It also has a similar front lip spoiler. Obviously, the M3 CS has four doors, rather than the M4 CSL’s two, so it isn’t as sleek looking.

Down the sides, we see side skirts like the M4 CSL and at the rear, the only chance we can see is a small bootlid spoiler.

Inside, changes visible include an Alcantara-trimmed steering wheel with a red top-centre marker and the M4 CSL’s carbon-fibre centre tunnel with a small padded armrest in place of a console storage box.

The seats are black leather-trimmed and red-accented versions of the M Carbon sports buckets in the regular M4 Competition rather than the CSL’s ultra-lightweight seats with fixed backrests, and height adjustment that can only occur with a tool kit in a workshop.

Unlike the M4 CSL, the M3 CS sedan’s rear seats haven’t been deleted but it is unclear if it will switch from five to four seats, removing its middle seating position, as the larger M5 did in its transition from Competition to CS trim.

We are expecting the 3.0-litre twin-turbocharged engine to deliver power to all four wheels thanks to the M xDrive system. How much power is not known for sure but rumours suggest it will pack the same 543 hp (405 kW) as the M4 CSL.