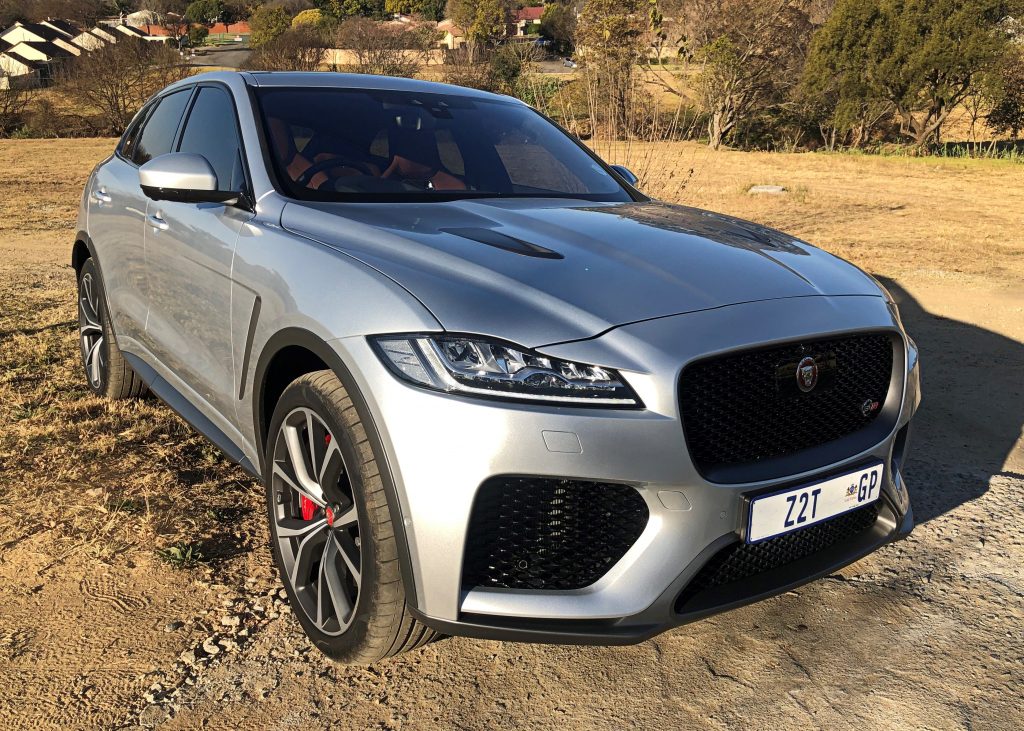 The Jaguar F-Pace SVR was revealed way back in March last year so it has taken a while to reach South Africa but it’s been worth the wait!

So what is the SVR version of Jag’s first SUV all about? To put it bluntly, JLR’s Special Vehicle Operations wanted to compete with the likes of the Mercedes-AMG GLC 63 S, Alfa Romeo Stelvio Quadrifoglio and now the BMW X3 M Competition.

Bodywork changes include four chromed exhaust pipes, a discreet lip attached to the rear spoiler and a bodykit consisting of new front and rear bumpers and sills finished in satin grey. Jaguar says all the changes reduce both lift and drag. Unlike the F-Type and even Range Rover Sport SVR versions, The F-Pace looks surprisingly subtle and you could even say it looks sophisticated.

Inside you will slide into some stylish slim bucket seats trimmed in quilted leather which can be ordered in a handful of colours to suit your taste. The whole feel works for a car like this but the infotainment system, unfortunately, remains a weak point.

Under the hood sits the well-known supercharged 5.0-litre V8 from the F-Type SVR and Land Rover Range Rover Sport SVR and it’s not any less absurd here. There is no launch control system but it is not necessary as it will claw its way to 100 km/h in 4.3 seconds before continuing to a top speed of 283 km/h. That makes it a fair bit slower than the competition but we could not give a damn.

The beastly V8 is connected to a ZF eight-speed automatic gearbox and thanks to the steering wheel-mounted paddle shifters, you never lose potency in the SVR. The SVO team made substantial modifications to the brakes (which is good considering it weighs 2.5 tons), chassis and steering, along with uprated dampers and springs and a new electronic differential at the back.

Jump on the loud pedal and the acceleration is explosive, flattered with a quick-shifting gearbox. If that does not do it for you then you will be able to hear the unmistakable whine from the supercharger and the most bonkers exhaust noise to egg you on. Turning into a corner you will feel a tad of body roll but that’s quickly forgotten as you press the throttle to slingshot you into the next bend with those four pipes barking a symphony of thunder.

The Jaguar F-Pace SVR is a seriously desirable car and one that brings out the inner-child in you over and over. Sure it will not be everyone’s cup of tea and is undoubtedly a niche product but in an increasingly sanitised world full of economy-focused and electrically-powered supercars, we’re glad that cars like this still exist, and still manage to deliver such a knock-out punch.

This is a medium-sized crossover SUV with 543 hp (405 kW) and 680 Nm of torque sent to all four wheels with an exhaust note that sounds specifically tuned to scare monsters. What is not to love?

Base price sits at R1,453,300 which is a decent chunk below the competition and although it is not as fast as them, I would still take this.