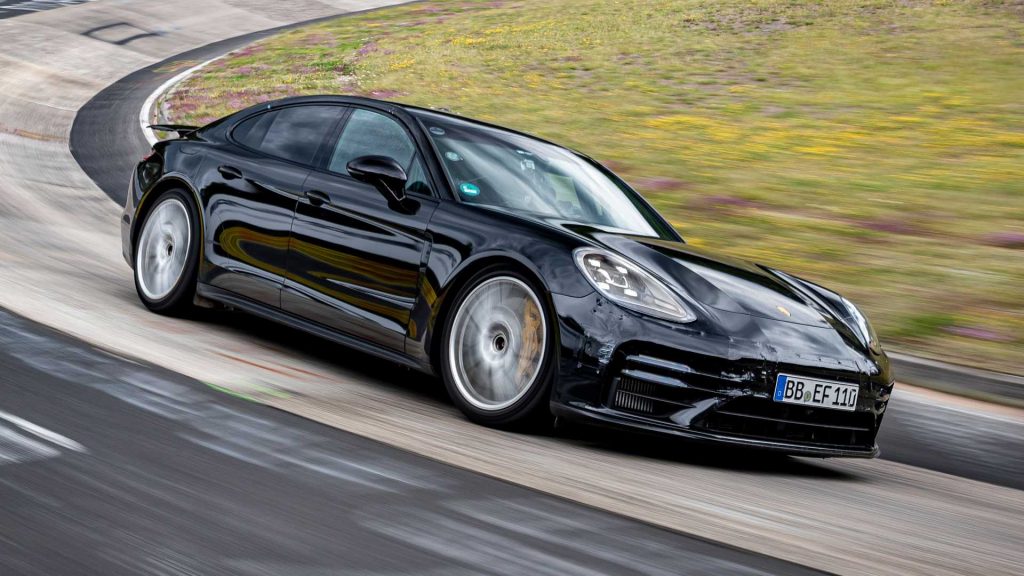 The Panamera facelift is soon to be revealed and Porsche has decided to kick off the teaser campaign by confirming that a new high-performance model will be joining the lineup.

On the 24th of July, this lightly disguised model driven by Lars Kern the model completed a full lap of the legendary Nürburgring Nordschleife over a distance of 20.832 kilometres in 7:29.81 minutes. In the official ranking of Nürburgring GmbH, this time certified by a notary public now stands as a new record in the “executive cars” category.

It is certainly not the fastest four-door sedan as the Mercedes-AMG GT 63 S lapped the circuit in 7:25.41.

Unfortunately, Porsche has not given us any technical information on this model but we know it will have more power and sharper steering, with Porsche saying body control and stability through the corners have been improved as well.

The official reveal is slated to take place at the end of the month when we’ll learn whether this is an upgraded Panamera Turbo or a new member of the already extensive lineup.

Around 13 seconds faster than the predecessor model

The lap record underlines the comprehensive enhancement of the second Panamera generation. In 2016, Lars Kern completed the circuit in the Eifel region in a time of 7:38.46 minutes driving a Panamera Turbo with an output of 550 PS (Fuel consumption combined 10.4 l/100 km; CO2 emissions combined 238 g/km (as of 08/2020)) – this time was achieved over the then usual distance for lap record attempts of 20.6 kilometres, in other words without the around 200 metres long circuit section at grandstand number 13 (T13). In accordance with the new statutes of Nürburgring GmbH, the lap time was now measured over the complete Nordschleife distance of 20.832 km. For comparison: Lars Kern and the new Panamera already passed the 20.6 km mark after 7:25.04 minutes. The record-breaking car and driver combination was therefore around 13 seconds faster than four years ago.