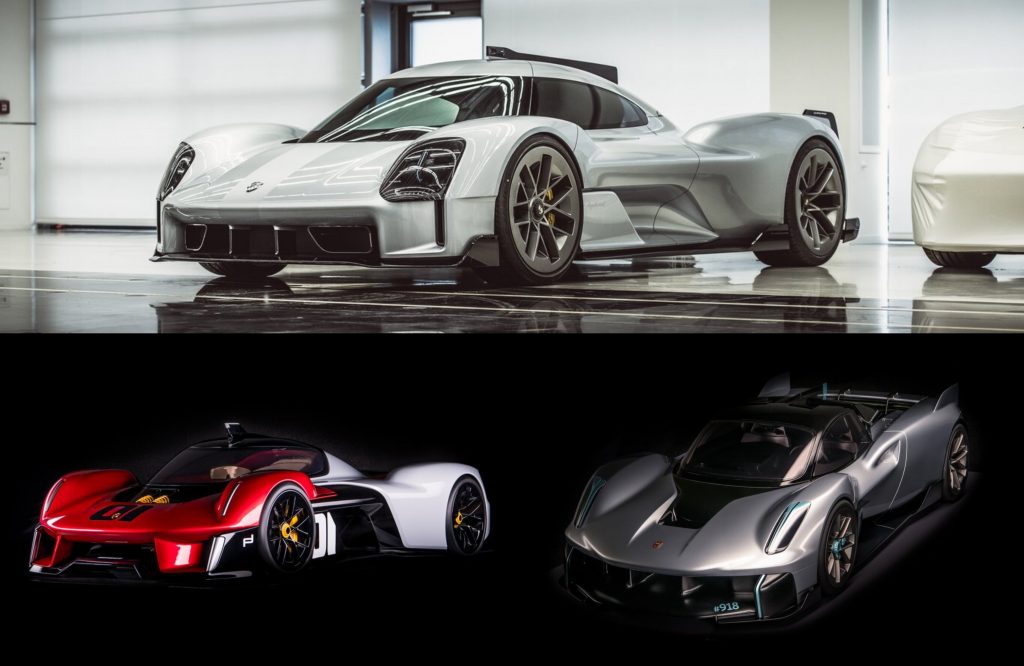 When it comes to unseen Porsche hypercars that really gets the petrol in our veins pumping and you will not be disappointed with these sensational visions.

The Porsche 919 Hybrid is one of the fastest and most successful racing cars of the 21st century with three consecutive wins at the 24 Hours of Le Mans from 2015 to 2017. Come 2018, the Evo version set a new lap record at the Nürburgring Nordschleife with Timo Bernhard at the wheel. After Porsche announced its departure from LMP1 racing, a new idea was born in Michael Mauer’s Weissach design team: namely crowning the success story with a limited special edition of the Porsche 919 Hybrid for the race track.

Enter the 919 Street which was developed using existing technology with the aim of providing an experience similar to that of the LMP1 racer.

Powering the hypercar is the powerful 900 PS (888 hp; 662 kW) hybrid racing drivetrain that helped the Porsche 919 to achieve victory at Le Mans. The dimensions and wheelbase were also the same as on the race car.

For a short while, it looked like it might be possible to build a customer car without road approval as a limited edition. However, the high-performance racing technology was extraordinarily complex – a team of mechanics needed around 45 minutes just to start the LMP1 engine. It would have been necessary to send a team of “flying doctors” to race tracks all over the world. For the time being, the idea of a Le Mans winner for gentleman drivers, therefore, remains a beautiful dream.

Porsche has won the 24 Hours of Le Mans an incredible 19 times but the 917 KH finished in Salzburg red-and-white livery occupies a very special place in the brand’s history. This was the first time Porsche claimed the overall victor in 1970.

To mark the return of Porsche to LMP1 in 2013, the design team came up with the Porsche 917. A 1:1 industrial plasticine model was created in six months that was intended to bring the living legend into the present day.

“The design had to clearly show the association with the Porsche 917 – as a new super sports car with explicit historic reference points,” explains Michael Mauer.

To mark the 50th anniversary of the Porsche 917, the super sports car vision was presented to the public for the first time in the Colours of Speed exhibition at the Porsche Museum in 2019.

When the design team is busy with free design projects, the brand history of Porsche is always present as a source of inspiration. So it was that the Porsche 906 served as the model for the proportions and body design for this vision of a super sports car.

“The design process for such visions is very free,” explains Michael Mauer. “It is not necessary to keep to pre-defined product identity characteristics. For example, the headlights were positioned in an air intake as a futuristic light source. When we were later developing an identity for our electric models, we took another look at these designs. The radical idea of simply integrating a light source in an opening instead of a glass cover seemed appropriate for us. We are now approaching this ideal.”

Formula E takes the technology of the future and puts it to the test under high-performance conditions.

Porsche already participates in this format of racing but what if the independently developed drivetrain could also serve as a basis for future all-electric sports cars for the race track and road.

Porsche jumped on this idea of expanding the area of customer motorsport and the idea of offering private individuals a car for the race track that would come as close as possible to a modern Formula E racer in terms of performance and driving dynamics.

The Porsche Vision E has therefore been designed as a radically lightweight, single-seater race car for the race track. With its central seat position and 800-volt technology, it would without doubt offer privateer drivers an otherwise unattainable driving experience.

The Porsche 918 Spyder is a milestone in the history of the brand and marked the beginning of the hybrid strategy as a technology carrier, while setting new standards for super sports cars with its full-carbon body and fully variable aerodynamics.

Porsche wondered how they could continue the success of this with a new project.

The design team created a fascinating new evolutionary stage of the Porsche 918 dubbed the Vision 918 RS.

With enhanced drive and chassis technology and a dramatically designed, aerodynamically optimised body, it could be the ultimate version of the latest super sports car from Weissach.

Porsche may have left LMP1 racing but Michael Mauer’s design team remained fascinated by the legend of Le Mans and experimented with race variations for customer sport and road use.

The Porsche Vision 920 was designed as a super sports car for the road or as a possible racing car for customer motorsport based on the LMP1 race cars.

The driver sits in a central cockpit while the car’s body floats just above the ground, with deep air ducts running through it. The red-and-white Porsche Vision 920 is, without doubt, one of the most extreme visions of a super sports car that has been developed in recent years in Weissach.