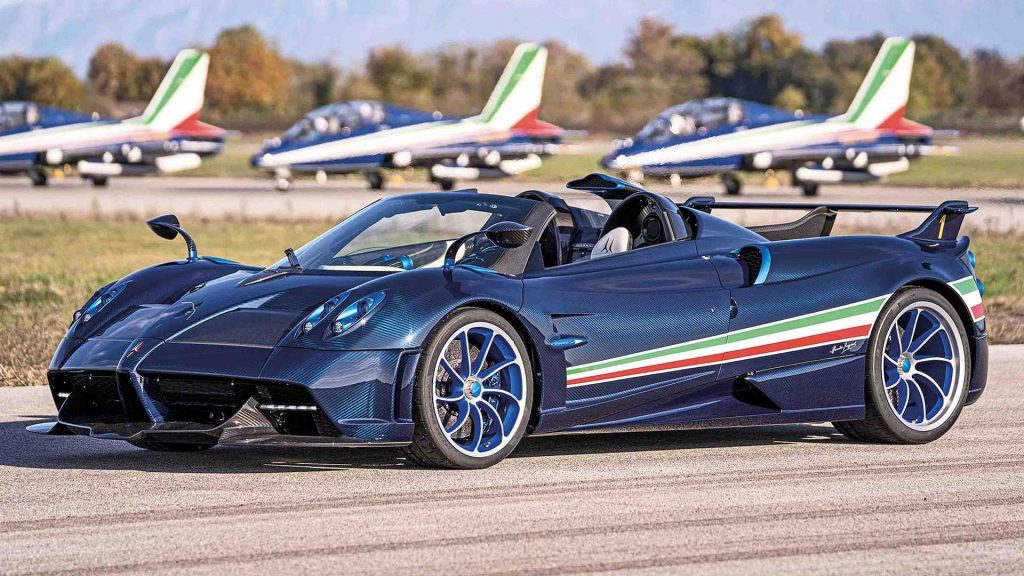 Pagani revealed the Zonda Cinque-based Tricolore nearly 11 years ago to celebrate the Frecce Tricolori, an aerobatic demonstration team of the Italian Air Force.

Fast forward to 2020 where the brand has decided to mark the 60th anniversary of the 313° Gruppo Addestramento Acrobatico, Pattuglia Acrobatica Nazionale, by unveiling the ultra-exclusive Huayra Tricolore.

Not only is it ultra-exclusive with just three units to be built but it is now their most powerful car to date with the familiar twin-turbo 6.0-litre V12 specifically developed by Mercedes-AMG for Pagani. In this latest application, it develops a whopping 829 hp (618 kW) and 1,100 Nm (811 lb-ft).

All this grunt is sent to the rear wheels through a 7-speed sequential transmission. Pagani hasn’t quoted performance figures for the Tricolore.

You will notice a handful of aeronautical concepts and technology similar to The Frecce Tricolori planes by style and design. The definite front splitter was designed to ensure maximum downforce while the front bumper’s side extractors and the air scoop regulate the heat exchange for the engine. The rear carbon fibre wing compensates for the increased downforce at the front.

The interior has aluminium components made from aerospace-grade alloys and machined from billet. The design of the rims, headlights, side air intakes, aluminium frames and the emblem of the Frecce Tricolori are all a direct tribute to the National Aerobatic Patrol.

If you assume such an engineering masterpiece will cost an arm and a leg and you would be right. Prices START from €5.5 million dwarfing the already drastic price of the Pagani Imola (around €4.5 million).

Hypothetically if you wanted to buy one and bring it to South Africa to drive on our roads it would cost around R200 million with import duties and taxes.