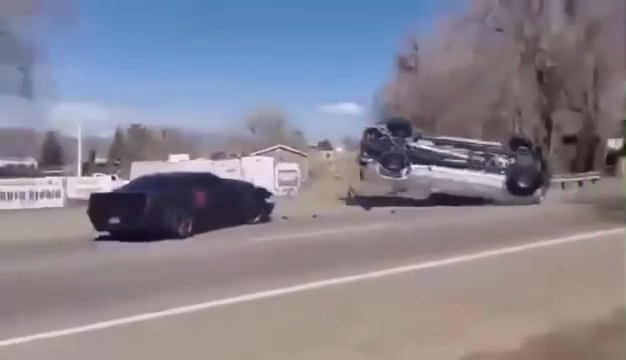 Cars and Coffee events in the United States are very popular but a recent one in Loveland, Colorado will be removed from that list following an incident.

Thanks to the driver of a black Dodge Challenger Hellcat, the Loveland Cars & Coffee will be no longer after colliding with a Silverado when leaving the event.

Footage recorded by attendees shows the muscle car leaving the function, but it doesn’t take long until it wreaks havoc. In an attempt to show off and impress the crowds, the driver makes an error resulting in the loss of control and collision with the Silverado.

The poor occupant(s) in the white truck was casually minding their own business when the muscle car hit the side of the car turning it over.

Reports suggest one person from the Chevy was transported to the local hospital with minor injuries.

As for the Hellcat driver, he received a ticket for reckless driving, according to Loveland Police Sgt. Rob Pride.