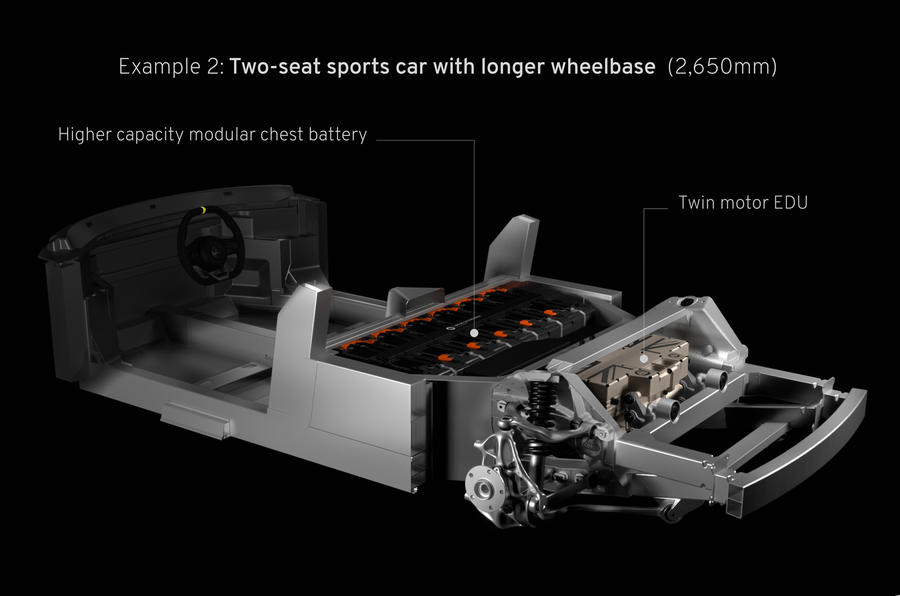 The recently launched Lotus Emira is the end of the road for combustion engine equipped Lotus models which means that from this point on, every car launched from Norfolk will be electrically powered.

At the moment, the manufacturer is planning a handful of electric-only architectures. These include a Cayenne-sized SUV (Type 132) due next year, a four-door coupe (Type 133) coming in 2023, a smaller Macan-rivaling crossover (Type 134) arriving in 2025, and a sports car (Type 135) scheduled to hit the market in 2026. The latter will ride on a new E-Sports platform co-developed with Alpine, and Lotus has now released some preliminary specifications.

Currently, it is being developed for two-seater models with a 66.4-kWh battery pack and one motor capable of up to 470 hp (350 kW). This will feature a minimum wheelbase of 2,470 mm but it will also cater for slightly longer two-seaters with an extended wheelbase of more than 2,650 mm. This would make it long enough to fit a larger 99.6-kWh battery pack and dual motors good for a combined 872 hp (650 kW).

Given Lotus’s upcoming four-seat coupé will be built in China and use a separate architecture supplied by parent company Geely, the four-seat sports car is highly likely to be an electric successor to the Evora 2+2, which recently bowed out to make way for the Emira.

Richard Moore, Lotus’s executive director of Engineering, said: “Project LEVA and the E-Sports architecture are perfect illustrations of the innovation which continues to be at the heart of everything Lotus does.

“Today’s EVs are heavy in comparison to their ICE equivalents, so the ARMD funding has helped Lotus to innovate earlier in the product cycle and develop a new vehicle architecture that targets lightweight and performance density from conception.

“Rather than developing a single vehicle, Lotus now has the blueprint for the next generation of EVs, both from Lotus and for Lotus Engineering to commercialise.”