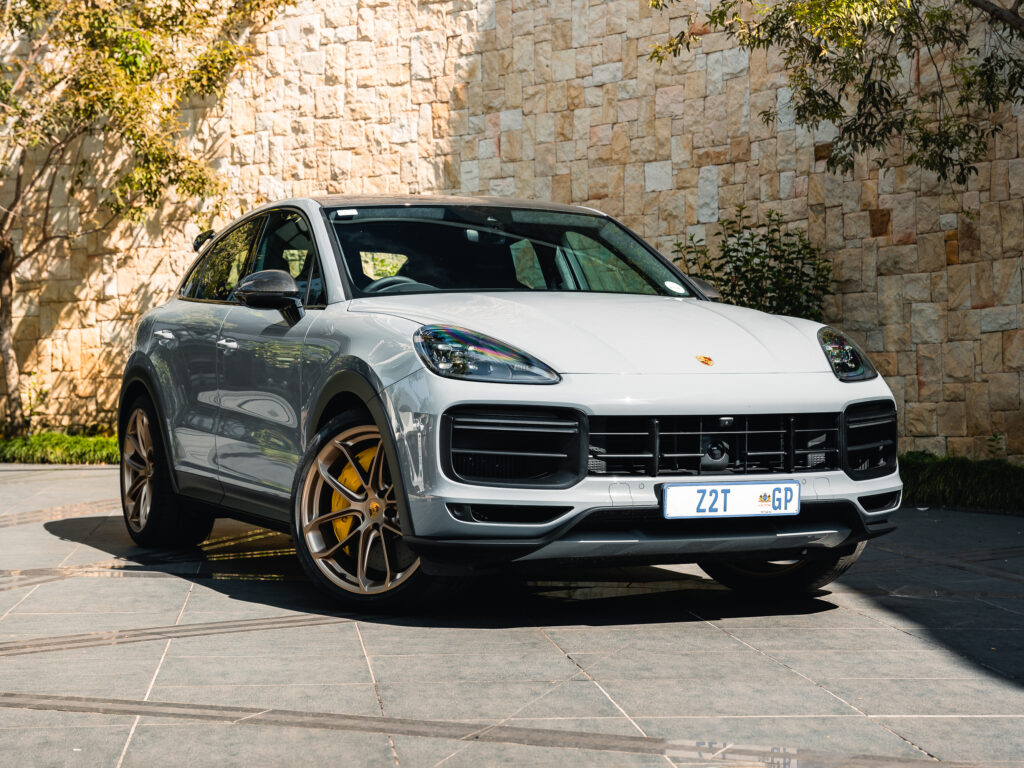 Fast Porsche Cayenne’s have been with us since 2003 and since then Porsche and of course others have refined this formula creating something we call a Super SUV. Not only do these big machines give a good sports car a run for its money but these days you can even catch out the odd supercar. This range-topping Cayenne Turbo GT has taken this formula to the next level.

Take one look at the Cayenne Turbo GT (especially from the front) and it does not appear much different to the already rapid Cayenne Turbo Coupe. Move further down the profile of the SUV and you will bump into some carbon fibre mirrors, a carbon fibre roof and not one but two spoilers (lower once is active) which when combined with the slightly lower ride height really suggests that this means business.

Hop inside and the interior is much like any other Cayenne with the usual Porsche blend of superb build quality and well-thought-out controls wrapping around you. There are some nice, GT-specific touches too, like an embossed GT logo on the central armrest and – inevitably – quite a lot of Alcantara. It is a rather delightful place to be, whether cruising along at autobahn speeds, chilling in traffic or carving up a back road from the embrace of its supportive, side-hugging seats.

Under the hood, you will come across the familiar 4.0-litre twin-turbo V8 but thanks to the ‘Turbo GT’ badge on top you know it has been reworked for this application. With the addition of the utterly glorious titanium exhaust system, it can deliver a meaty 631 hp (431 kW) and 850 Nm (626 lb-ft) of torque. That makes it just 10 hp (7 kW) shy of the Lamborghini Urus which it shares its platform and engine with.

That grunt is sent to the tarmac via a quicker-shifting eight-speed automatic and a water-cooled torque-vectoring all-wheel-drive system that’s beefier than the air-cooled unit on lesser Cayennes. Stiffer air springs, massive carbon-ceramic brakes, and a more aggressive four-wheel steering system round out the Turbo GT package and what a package it is.

Add all of this together and the 2,200 kg SUV can rocket off the line to 100 km/h in just 3.3 seconds making it 0.3s quicker than the more expensive cousin from Sant’Agata Bolognese. Yes, we are aware there is a facelift / new Urus coming out which will more than likely grab the quickest SUV in the world crown but at the time of writing, this is the quickest SUV we have ever tested and current lap record holder at the ‘Ring.

Real-world everyday driving is just as impressive as pushing it hard on some twisty tarmac and other than being out of this world fast, it is immensely engaging and fun to pilot. It feels incredibly light on its feet and the eight-speed auto is so good it feels and acts like the famed PDK gearbox backing up the V8 bark with perfectly timed shifts each and every time.

The fast, precise steering rack is simply the best we have felt in a car this size. The feedback is there when you need it to dive hard into corners and slingshot out of them and with the help of the torque vectoring and four-wheel steering system it actually laughs in the face of physics.

Some passengers mentioned the suspension is a bit stiff but we felt in Normal mode it is supremely comfortable for when you don’t want to teleport to your destination.

Priced from R3,500,000 it comes in at R495k cheaper than the Urus base price which gives you a lot of breathing room for pretty much as many options as you want – even the Paint to Sample offering of just over R200k.

As mentioned in one of our social media posts while we had the car, this Cayenne Turbo GT is one of the purest, most engaging, and most fun-to-drive SUVs to hit the road. The Super SUV segment is always growing and evolving and we feel this could be remembered as one that first really defined the segment.

Images thanks to Matt Sleep

Porsche
Share. Facebook Email Twitter LinkedIn WhatsApp Telegram
Previous ArticleWhat Happens When You Get A DUI For The First Time?
Next Article What Is Lane Splitting? Is It Legal? Why Use It And Why Not?