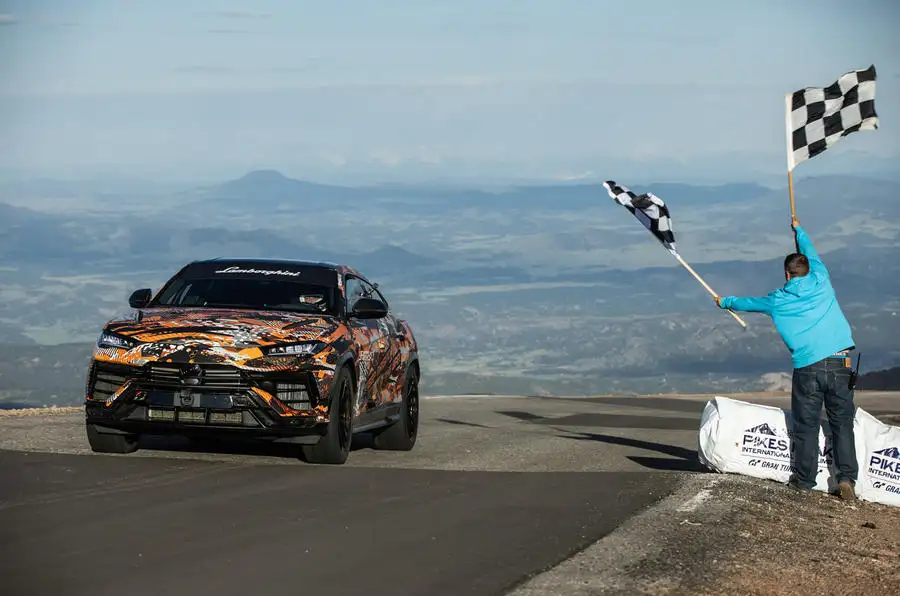 Lamborghini has just revealed that the updated and uprated Urus has snatched the Pikes Peak International Hill Climb record for production SUVs.

The more hardcore Urus ‘Sport’ reached the top of the famous Colorado Hillclimb in 10min 32.064sec making it 17 seconds quicker than the Bentley Bentayga from 2018. Even though the Urus did not race in the official event, Lamborghini says it was recorded on the same route by the trial’s official timekeepers.

While much of the model’s exterior was obscured, the Urus appeared to display updated, more aggressive exterior styling and Lamborghini said the car was driven by a modified version of the twin-turbocharged 4.0-litre V8 engine seen under the bonnet of the standard Urus.

For ultimate grip, the Urus was fitted with upgraded, semi-slick Pirelli P Zero Trofeo R tyres, which were co-developed by Lamborghini.

The new variant will make its public debut at the Pebble Beach Concours d’Elegance event in California next weekend as confirmed previously by Lamborghini CEO Stephan Winkelmann.

It’s set to be the last new Urus variant with pure petrol power and is slated to be sold for less than two years before it’s succeeded by plug-in hybrid variant in 2024, and the entire Lamborghini range goes hybrid-only.

““The decision to test ourselves at Pikes Peak reflects the Lamborghini spirit of ‘expect the unexpected’ and demonstrates the outstanding performance of the new Urus model to be presented shortly,” said Rouven Mohr, Lamborghini’s chief technical officer.

“Pikes Peak is the most famous hillclimb event in the world, as well as being extremely challenging for the car. The uneven track layout tests the chassis’ balance, the significant altitude differences stress the powertrain and the weather conditions can change very rapidly between start to finish.”